The toughest 4 matches in our young team's history right now. Hosting Manchester United, visiting Chelsea, coming home to welcome Liverpool, then traveling to battle it out against Leicester... All Premier League matches.

Again, we come up just short for POTM-type awards. Bonk is just second to Vardy this month. 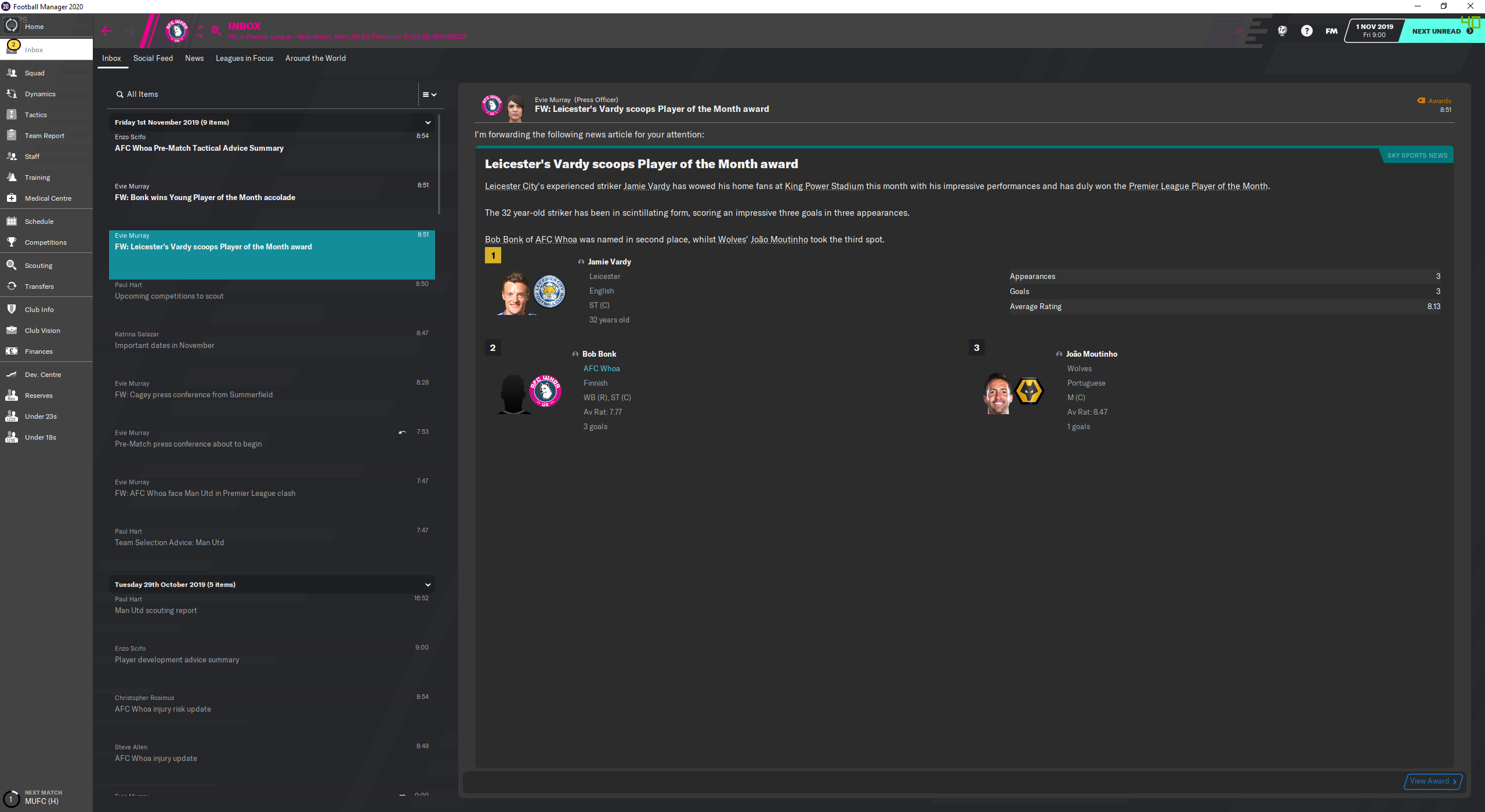 He does, however, win the Young Player of the Month award! Our first award for any player, I think! 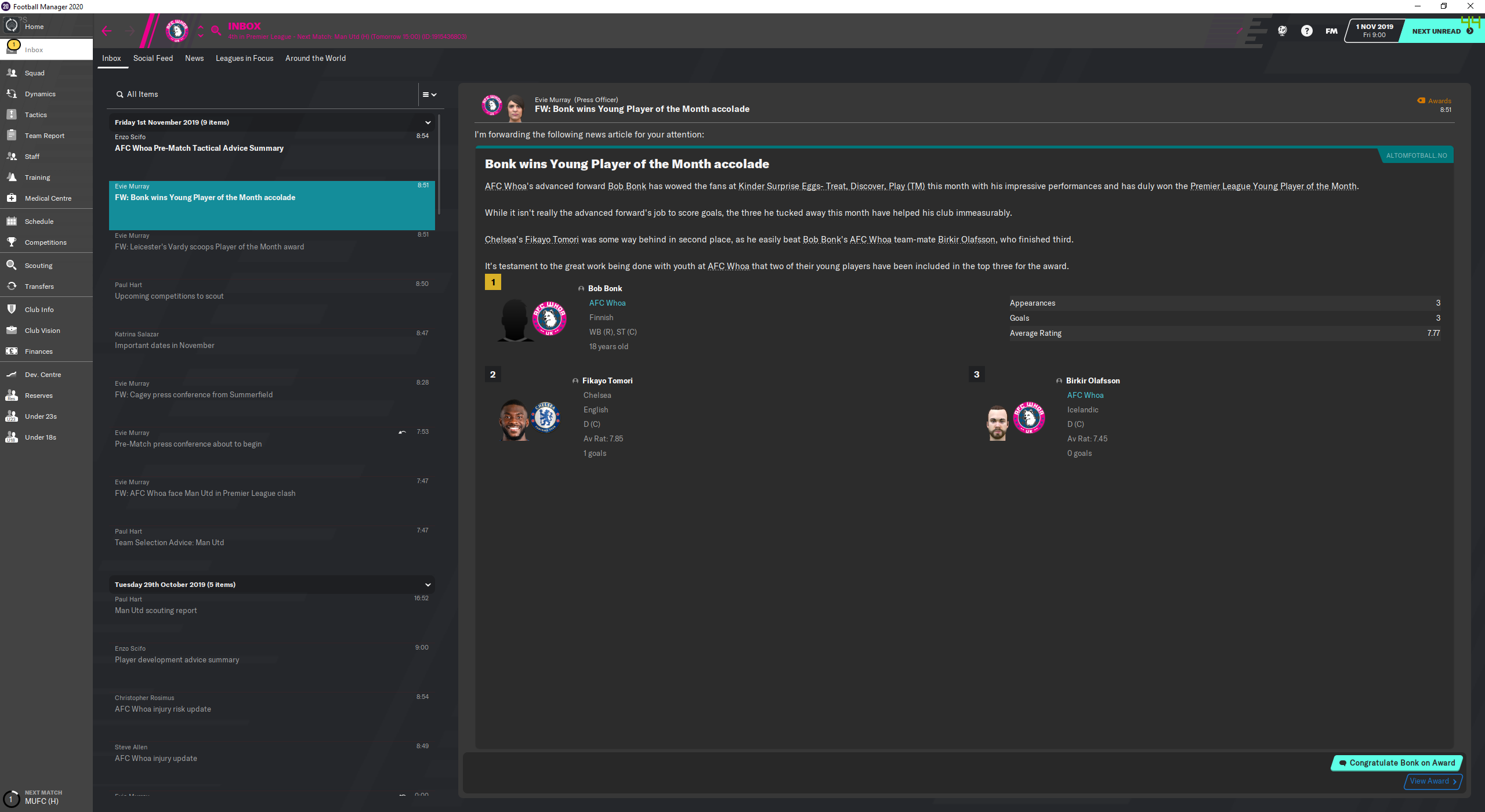 Board maintains their happiness with us. 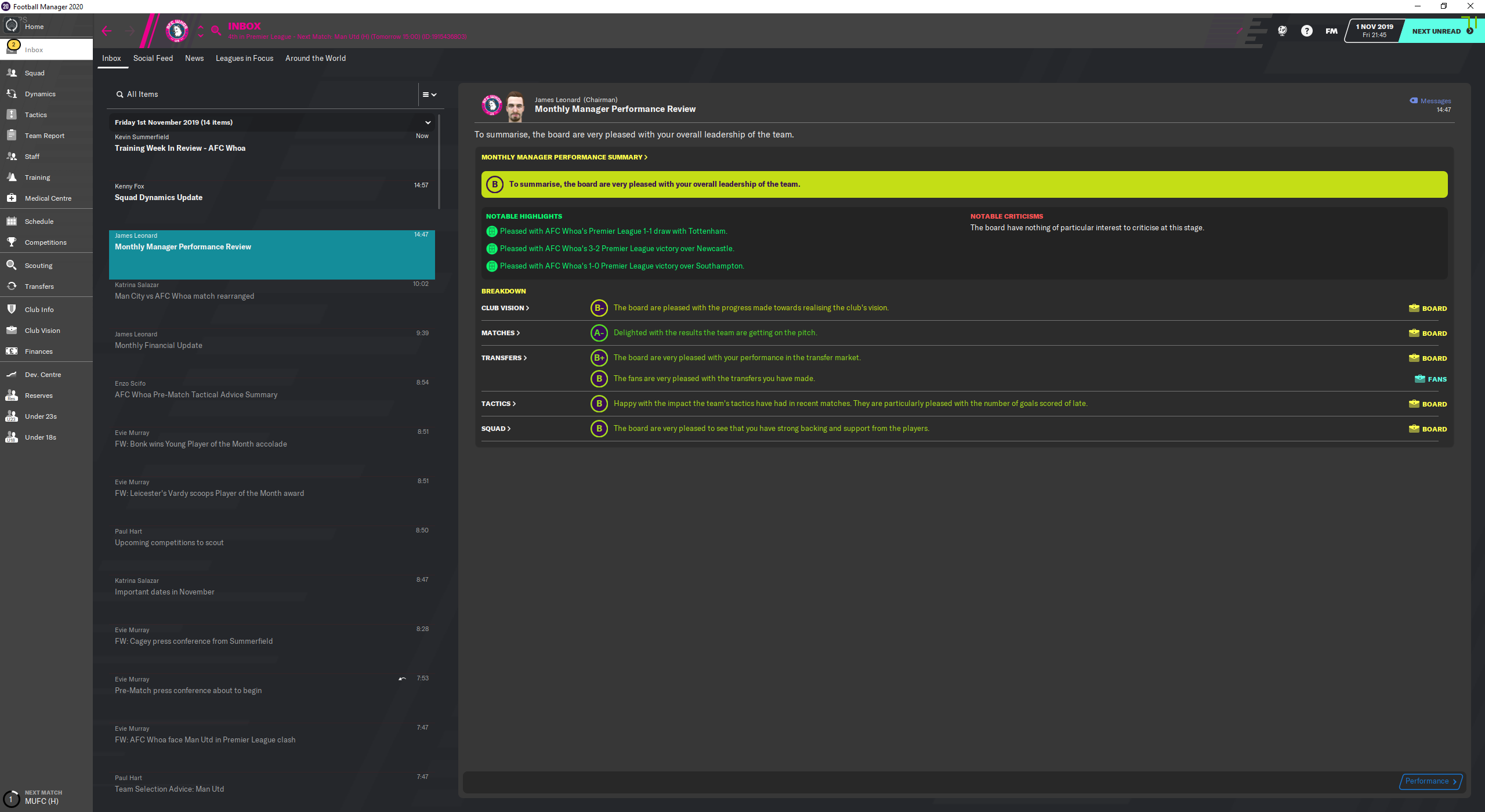 Our match against Man United is set to kick off soon... And the house seems to think we are 5-4 favorites!

We will come out with the 3 at back formation. Hoping to starve United of possession in this one. 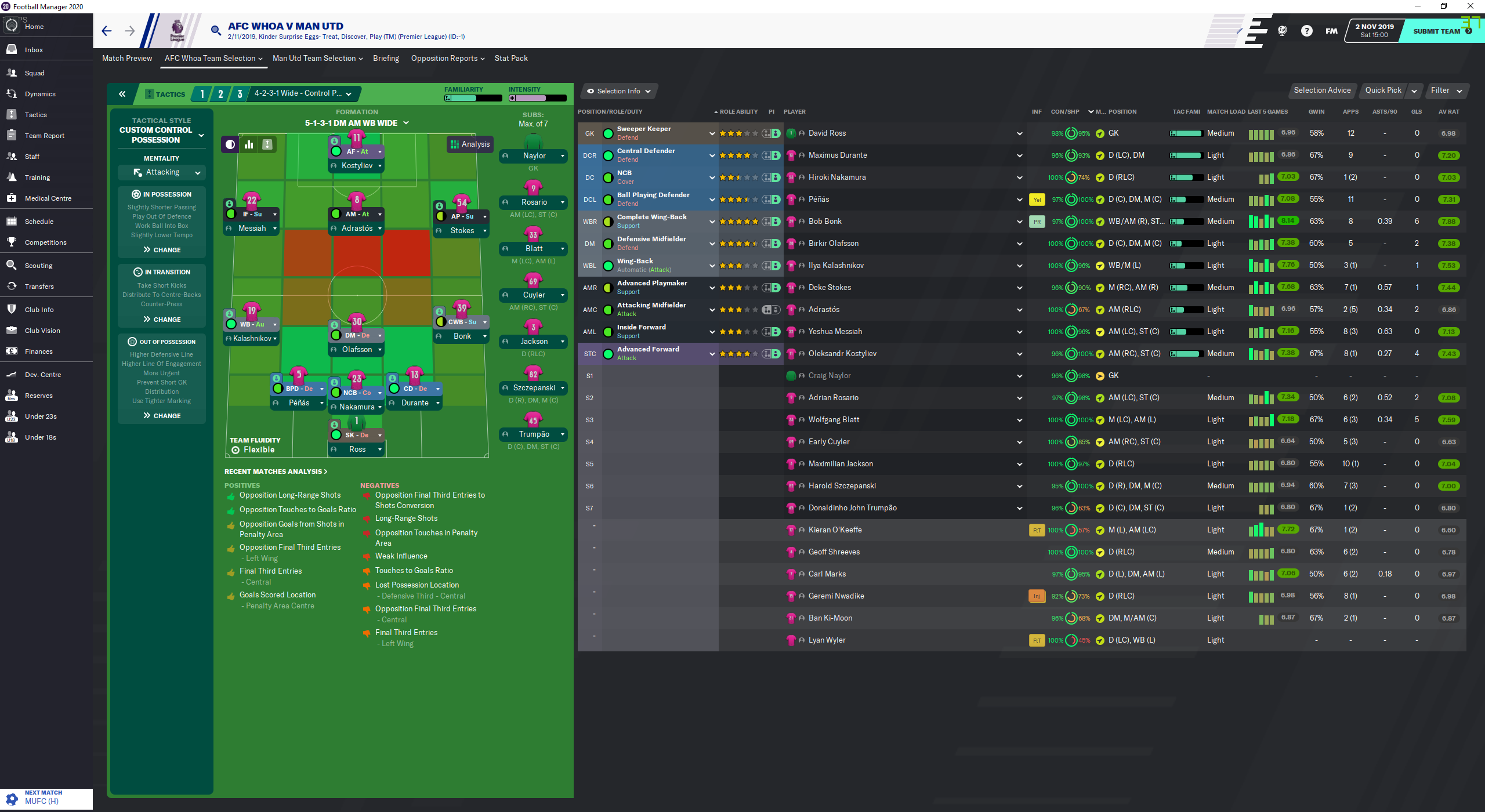 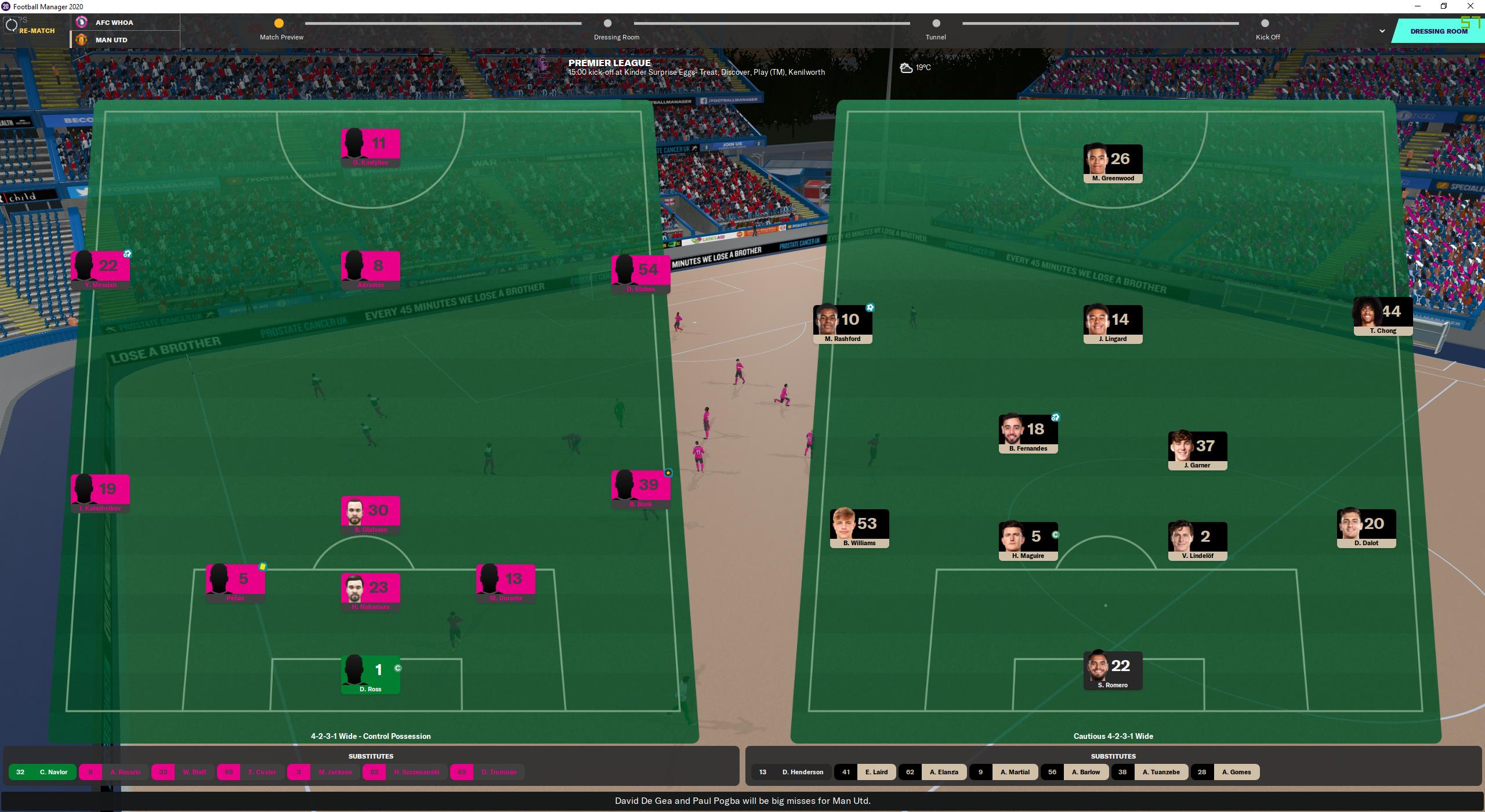 Early in the game and Bonk gets a piece of the ball and hits the left post! It comes out to Kalashnikov who shoots to the bottom left but De Gea manages to parry it. What an exciting attack from AFC Whoa!

That is until the 7th minute. United have a corner and Garner is unmarked and puts one past David Ross. His first ever goal for Manchester United. 1-0, The WhoaDogs trail early.

Ten minutes later, an amazing run down the middle by Adrastos and he finds Kalashnikov who dekes 2 defenders and puts the ball past Sergio Romero to pull even! 1-1!

At 25', Penas gets a beautiful looping cross across the face of the goal and Durante puts a powerful header. Unfortunately, Romero makes the diving parry and it goes out for a corner.

Romero saves the corner and punts a deep one to Greenwood who has ACRES of space and he beats David Ross to make it 2-1 United in the lead.

Bonk dribbles into the box, makes a few men miss and fires a shot at Romero, but the goal keeper stands strong and parries it away. Kostyliev sees the opportunity and pounces on the ball and puts it away! The teams are now even again with 8 minutes remaining.

Rashford gets free in the box and Bonk makes a last ditch effort and manages to deflect the shot. That SURELY would have been the game winner had Bonk not stepped in! Despite having a terrible game today, Bonk has really stepped it up in the last few minutes.

DRAMA AT THE END. AT 90'+ 4, Kostyliev dispossess Maguire and dribbles at Romero. Lindelof is then forced to bring Kostyliev down in the box. Is it? VAR AGREES ITS A PENALTY! Kostyliev gets set ... AND ROMERO MAKES THE SAVE. THE GAME IS OVER. 2-2 what a ridiculous match.

AFC Whoa are unable to deliver win for Nelly on his birthday. 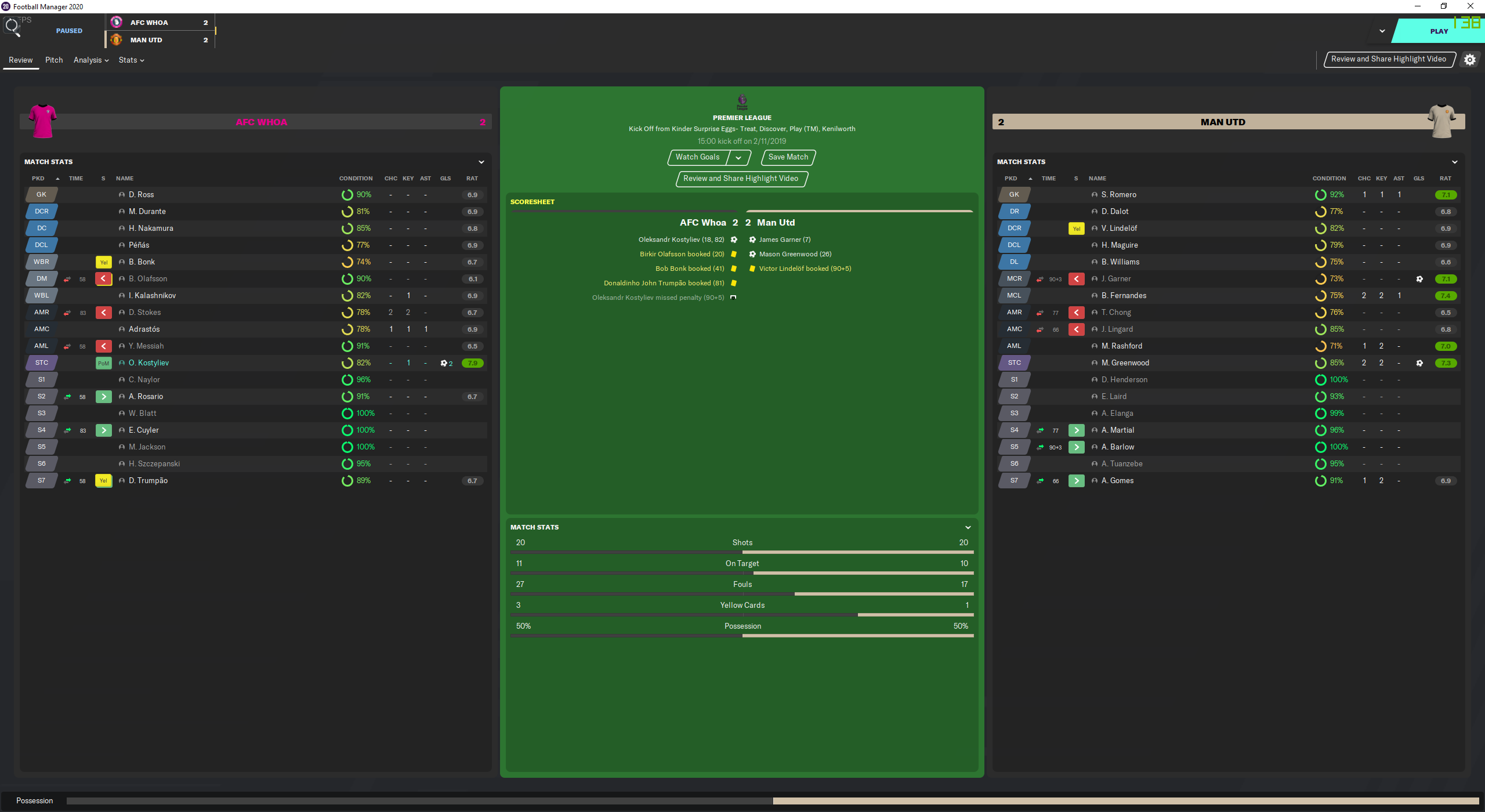 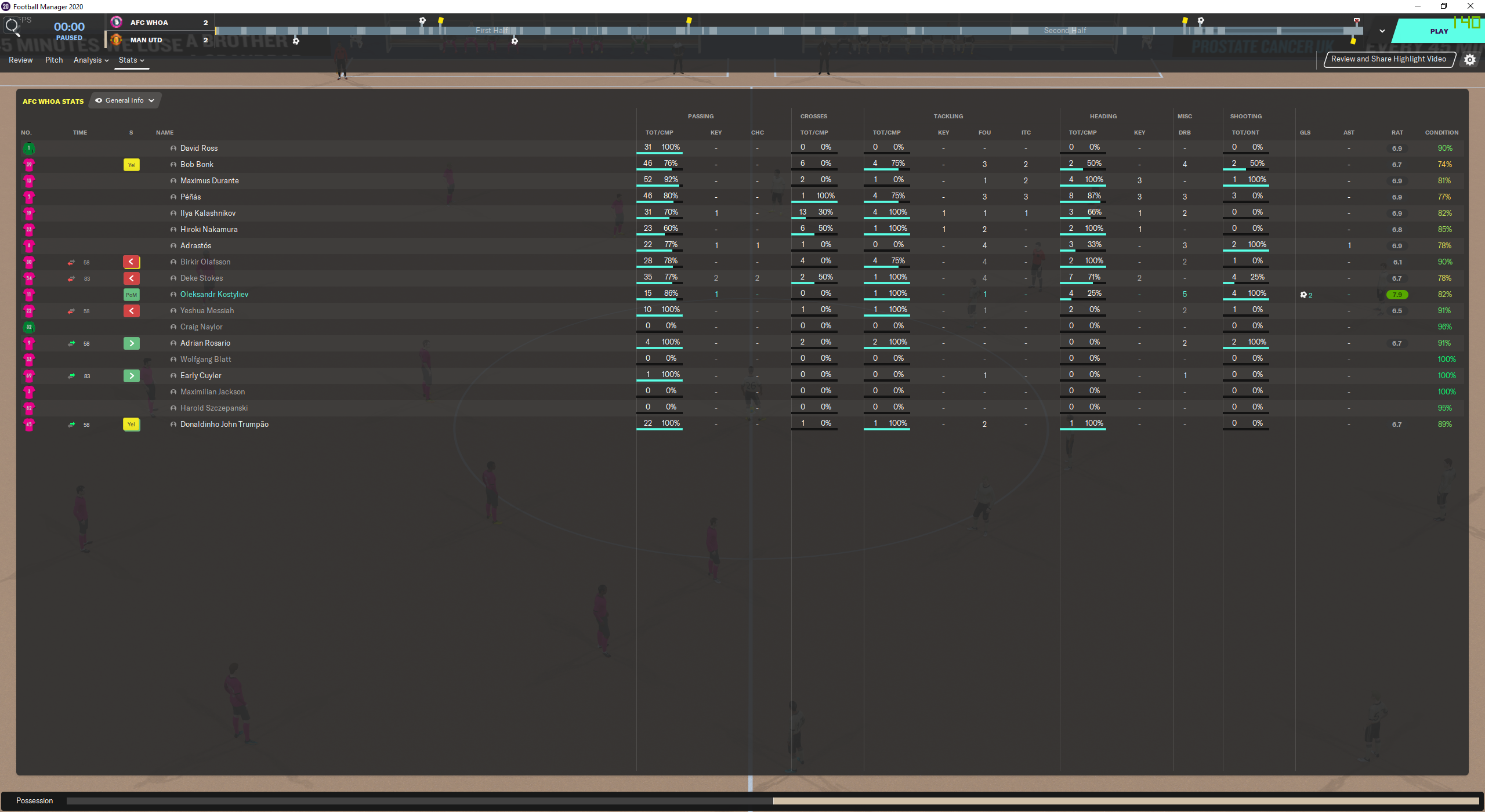 Next up, we head to Stamford Bridge to face Chelsea. 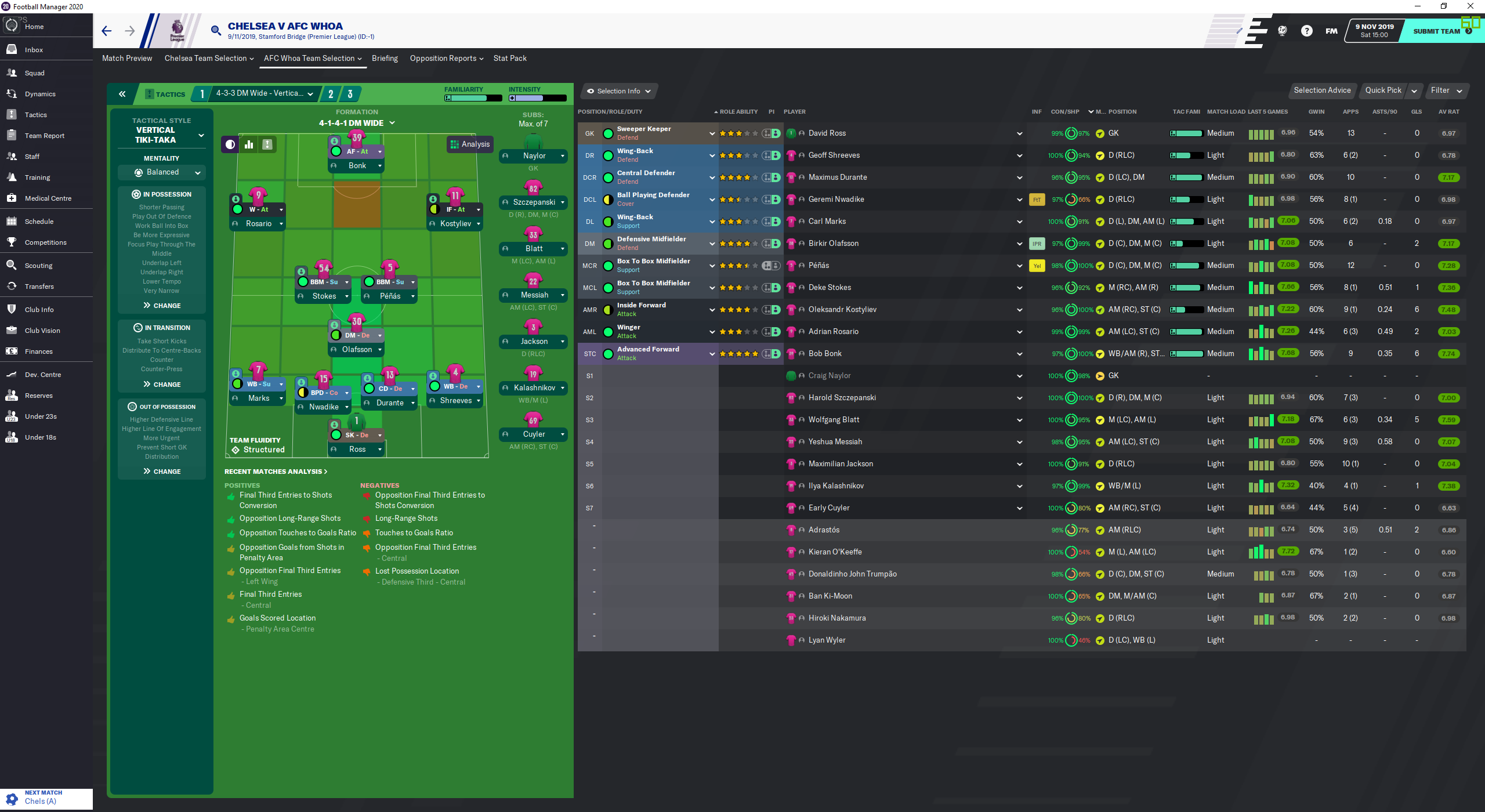 Here's how we match up. 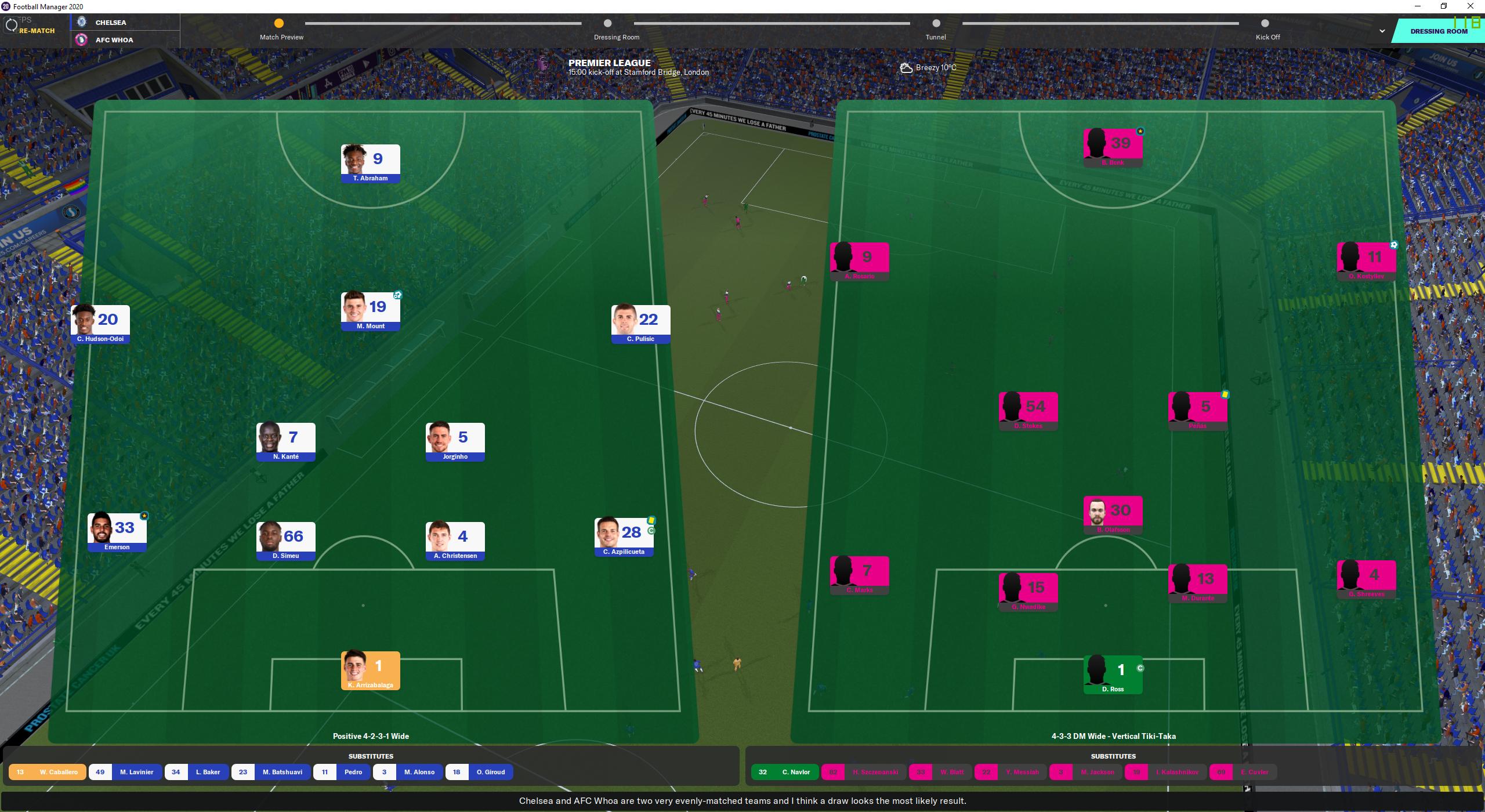 Pulisic, the American Messi quickly shows us why Chelsea is one of the teams to beat with a strike at 30' and then follows it up with another goal at 35'.

Things are looking grim heading into the half down 2-0 with only one shot.

And Stokes misses an absolute sitter, sending it across the face of the goal.

And late in the game AGAIN we have a great chance, but Bonk misses a pretty much empty net.

Penas manages to get two yellows within 4 minutes of each other and is sent home early. Just about sums up the team's night. 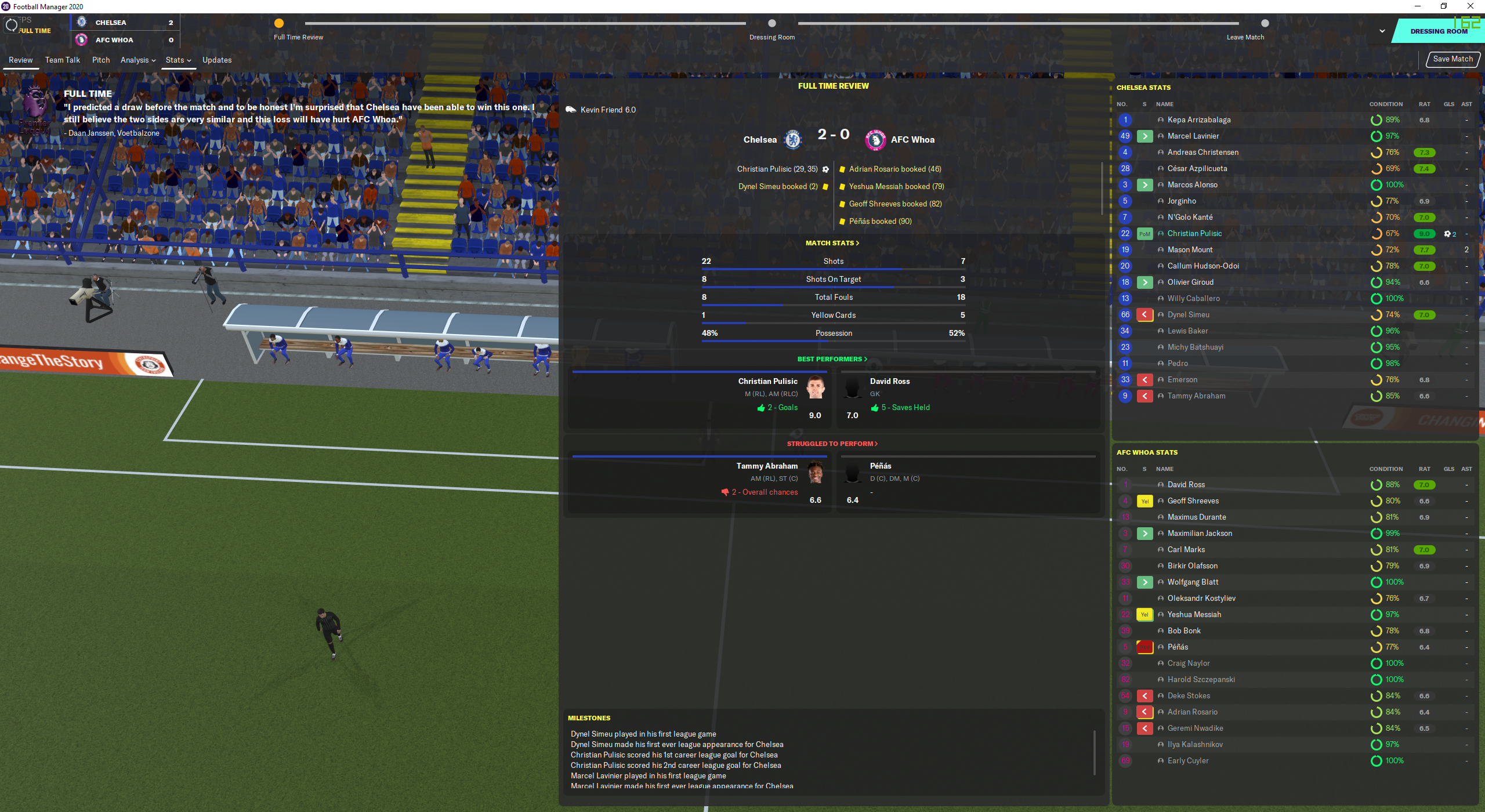 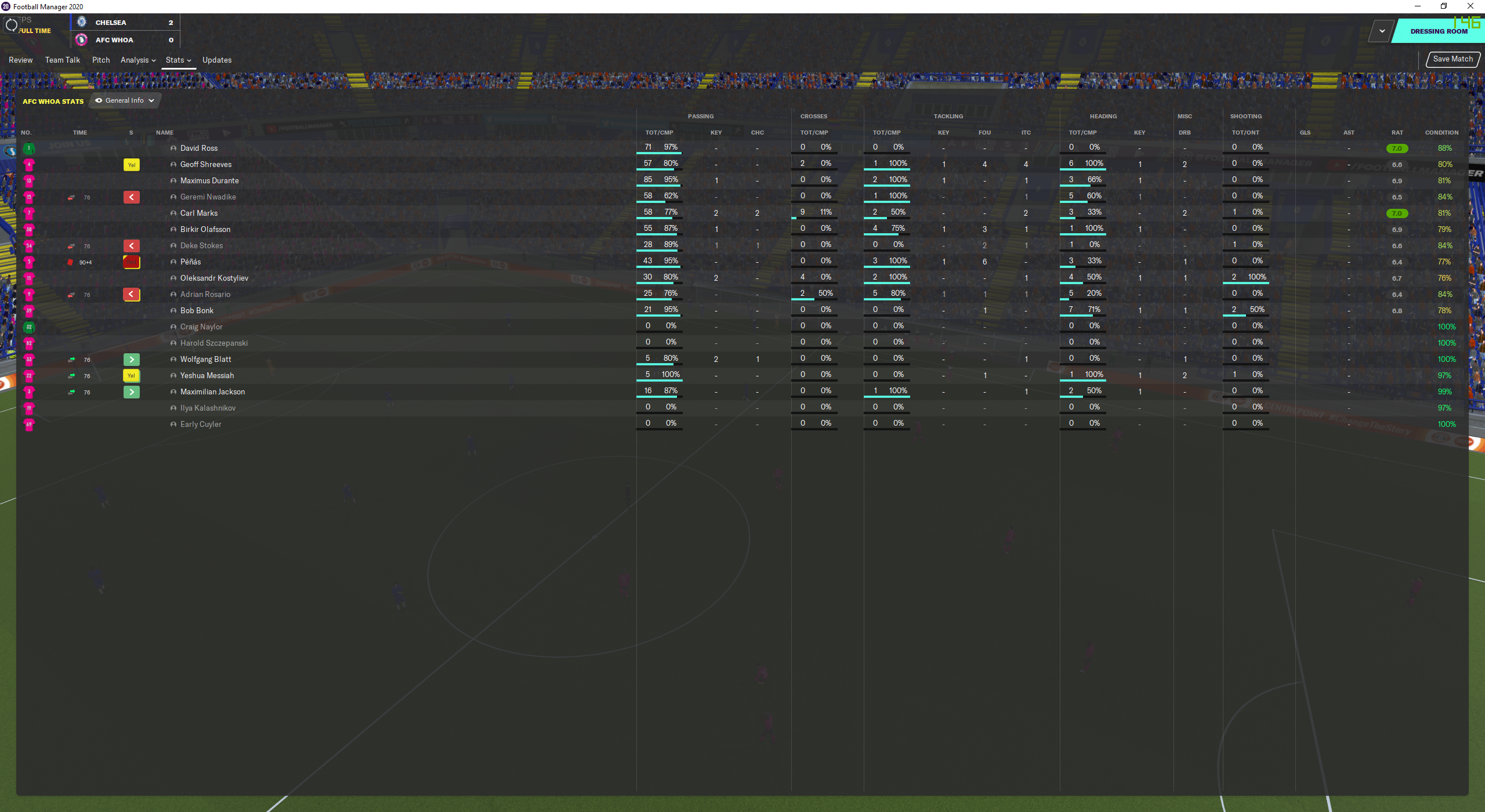 International break... Let's see how everyone is getting on! 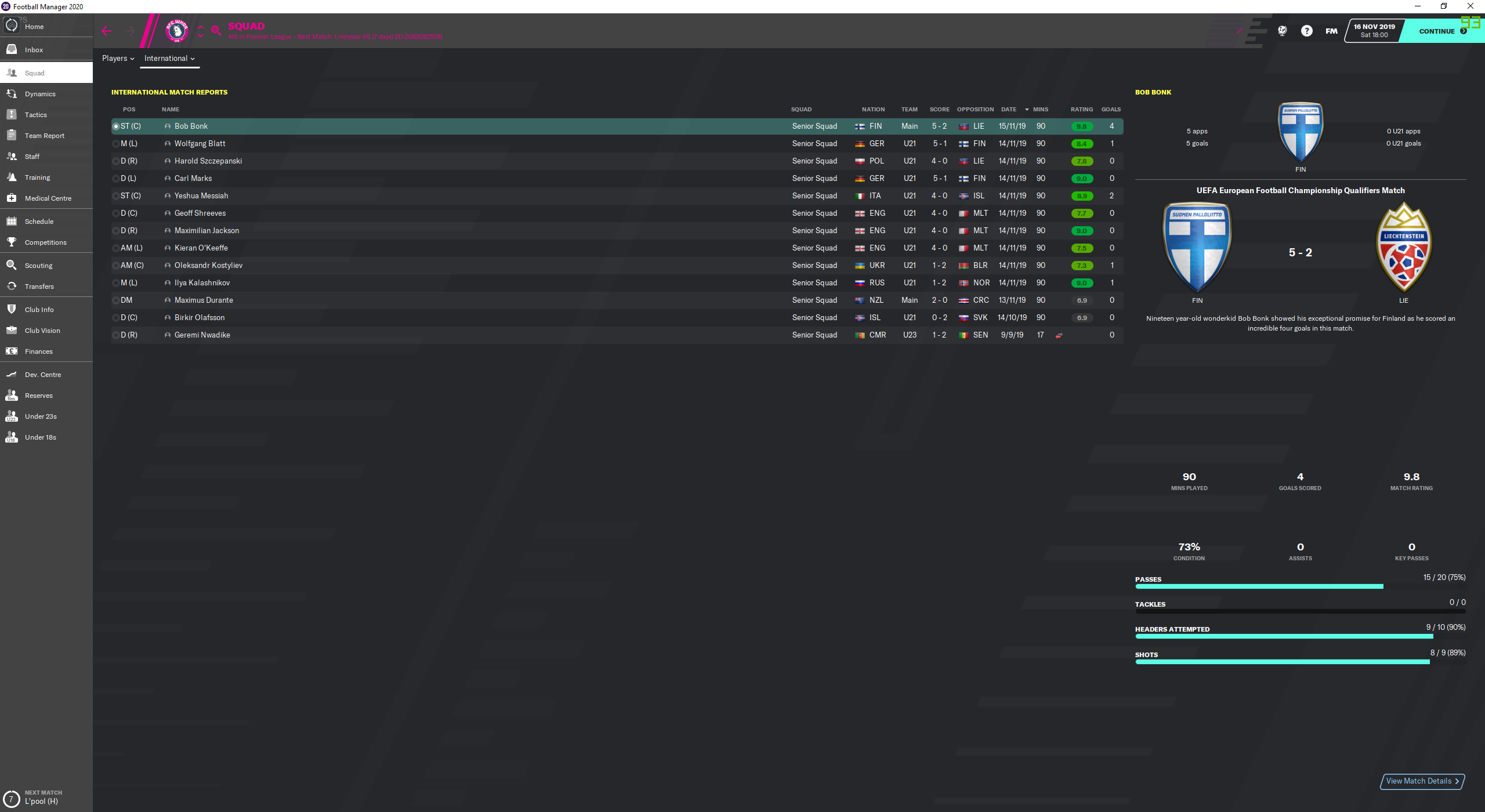 Durante is on the shortlist for OFC Player of the Year! 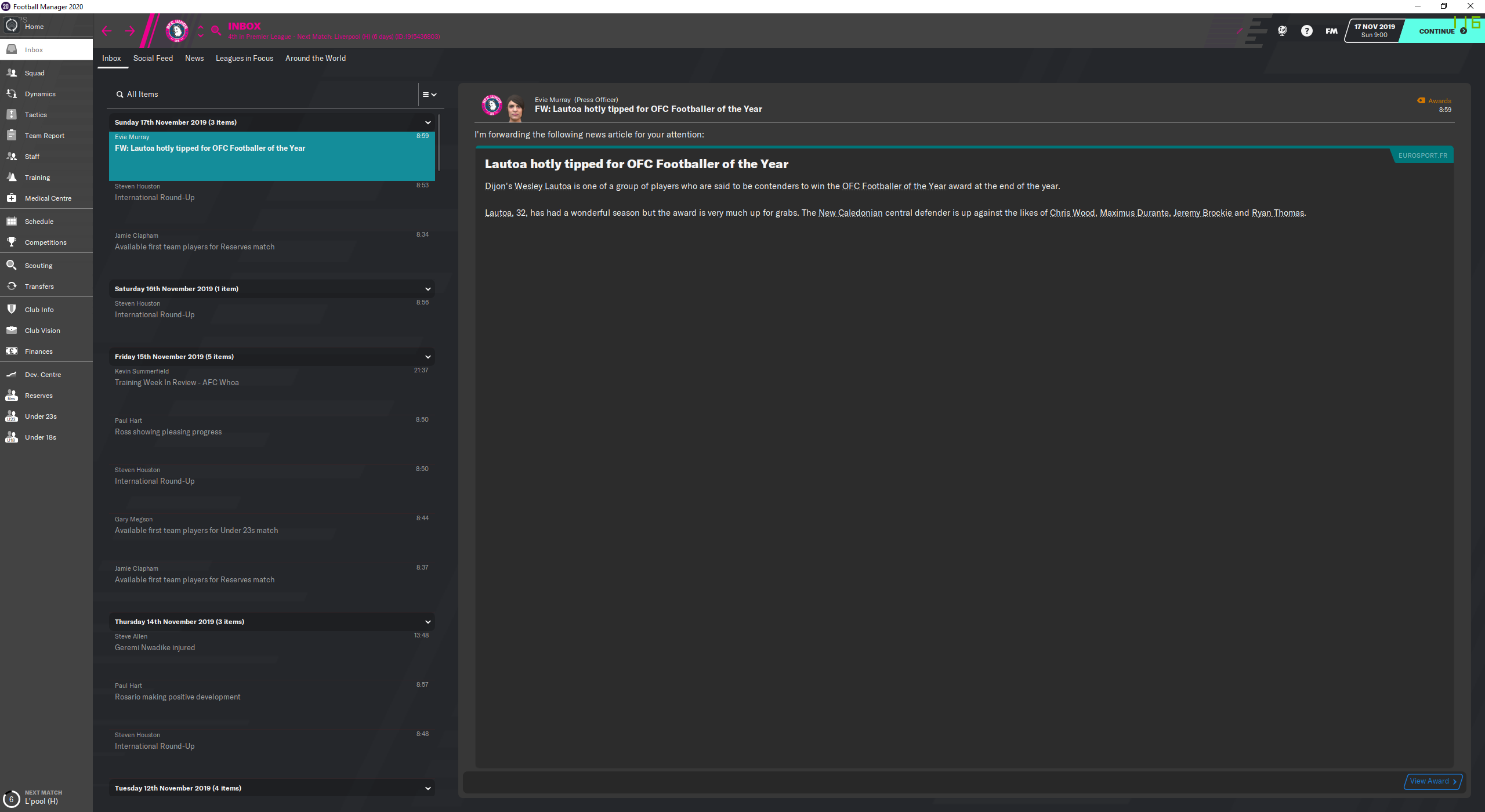 Alright! Everyone is back in the squad now... We host Liverpool. I think we're going to try to be a bit aggressive and see if we can't surprise them out of the gate, so we'll line up in a more attacking formation. 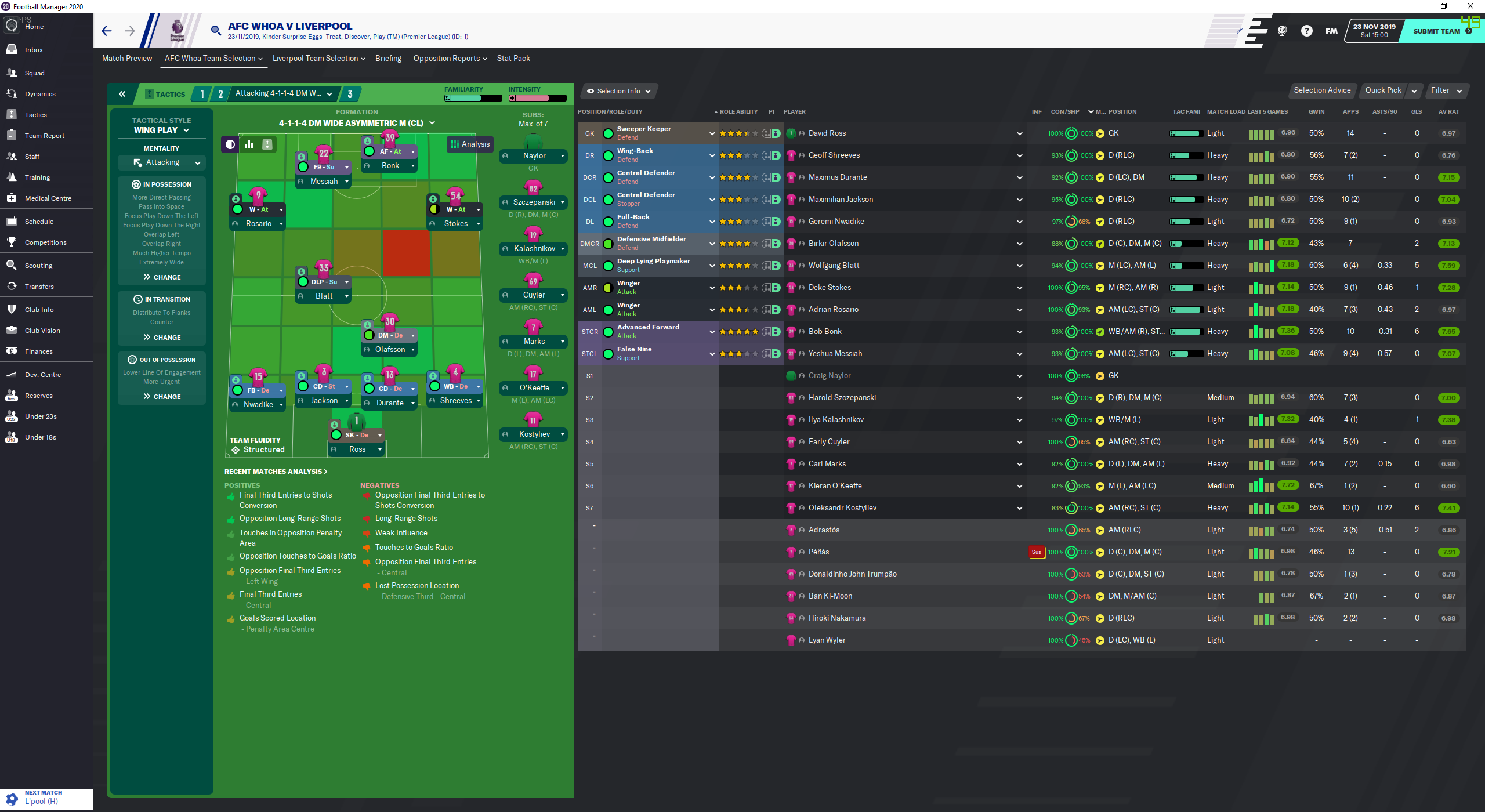 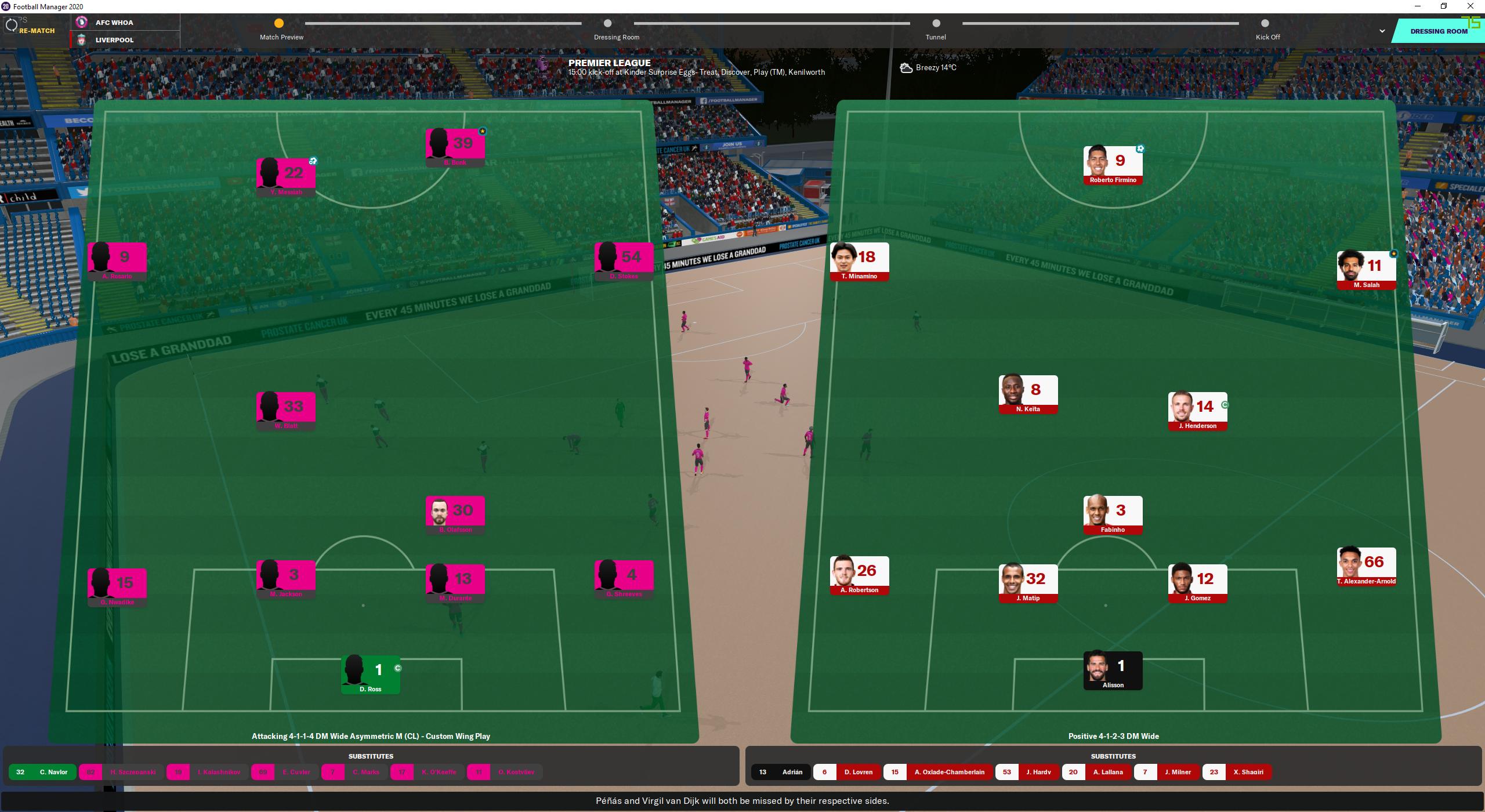 Fabinho gets his head on a great cross from Minamino and puts it past David Ross at the 21 minute mark, but VAR calls it offside! No goal!

We go into the half still even, but it looks ugly out there. 20 shots to 0 at the moment.

We use all three substitutions at the half and switch to our 3 at back formation.

Encouraging stuff as we string together like 10 passes in a row and Messiah gets our first shot away!

Suddenly, the team is looking a lot more motivated! The team is starting to play like a team, but the scoreline remains even and Liverpool remain dangerous.

85' and AFC Whoa win a corner. Marks to take it. He swings one in the near post. AND JACKSON IS THERE AND PUTS IT PAST ALISSON. AGAINST ALL ODDS, AFC WHOA ARE SUDDENLY AHEAD 1-0!

AND THE REFEREE BLOWS THE WHISTLE. WHAT AN AMAZING TURNAROUND FOR THE WHOADOGS! 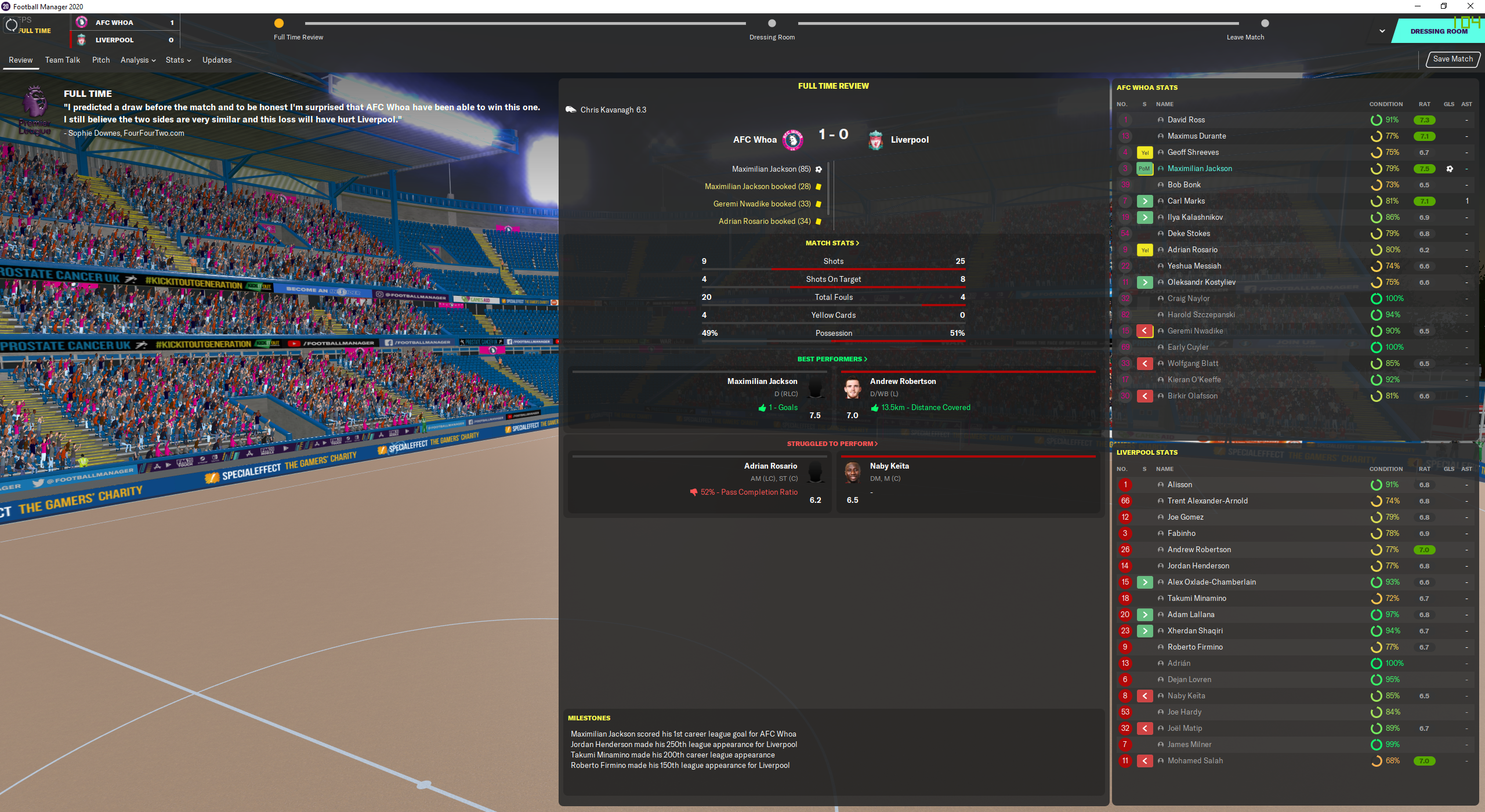 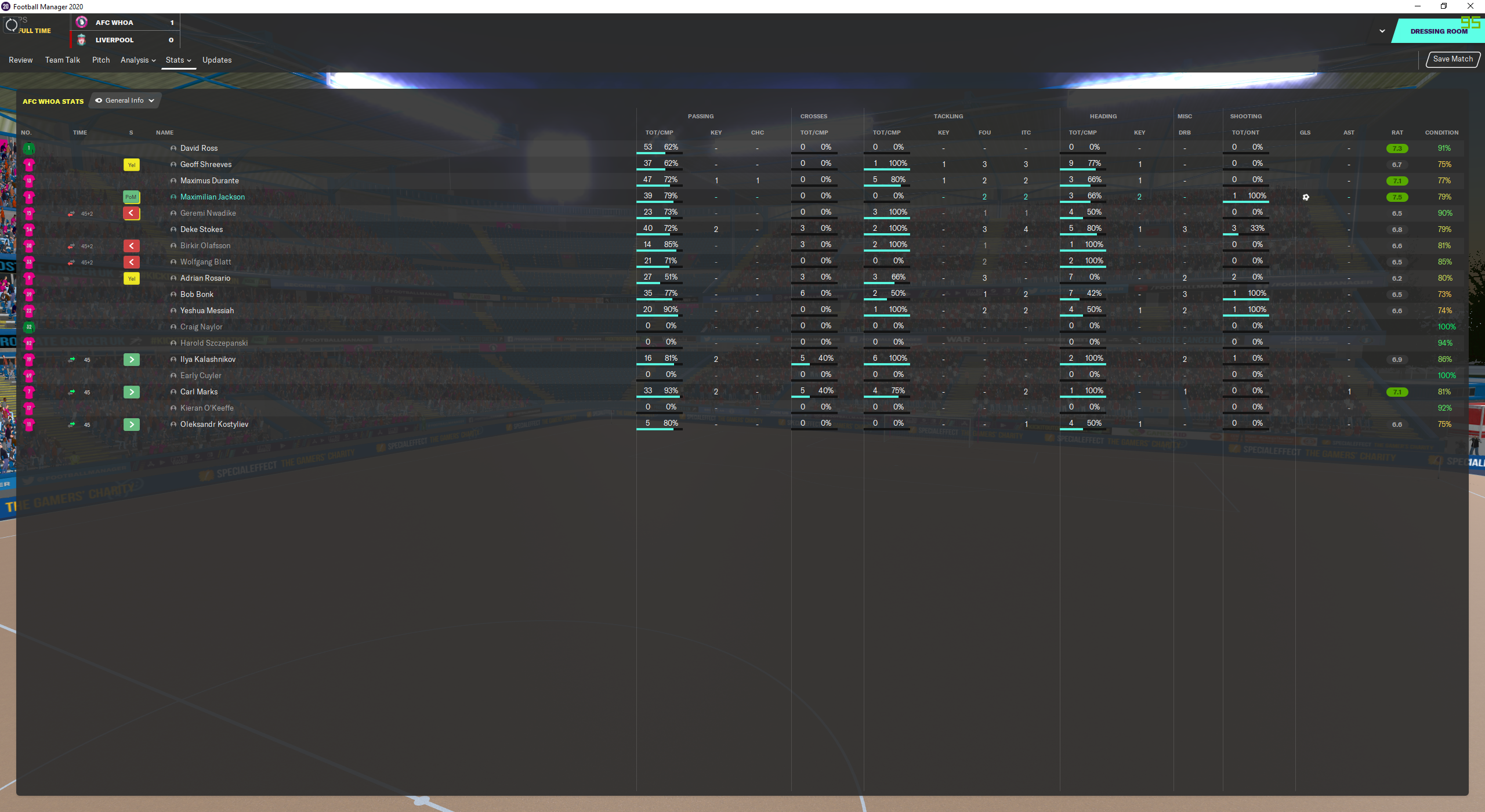 Jackson and Ross make the Team of the Week! 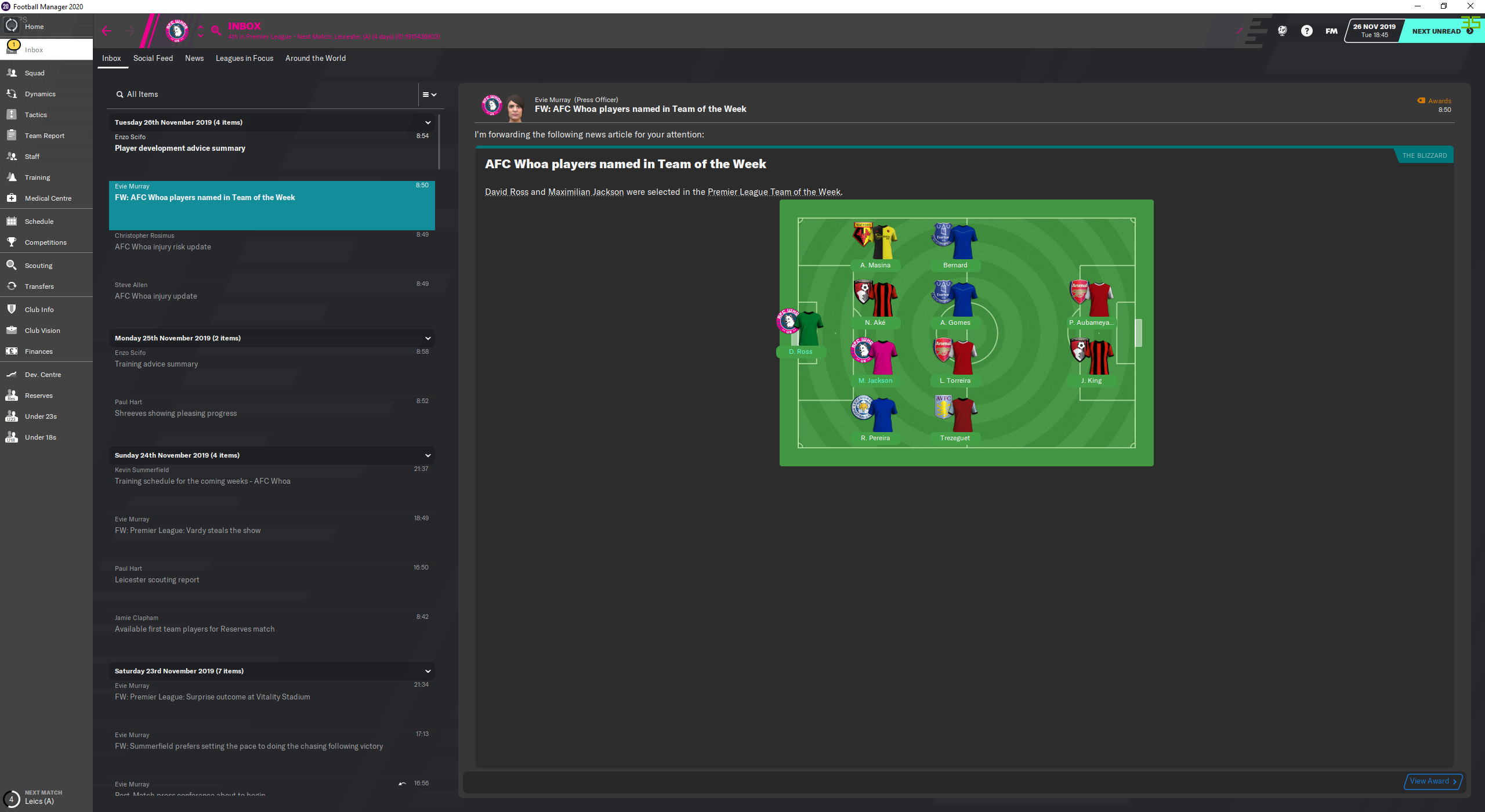 David Ross on the shortlist for US Soccer Young Player of the Year? 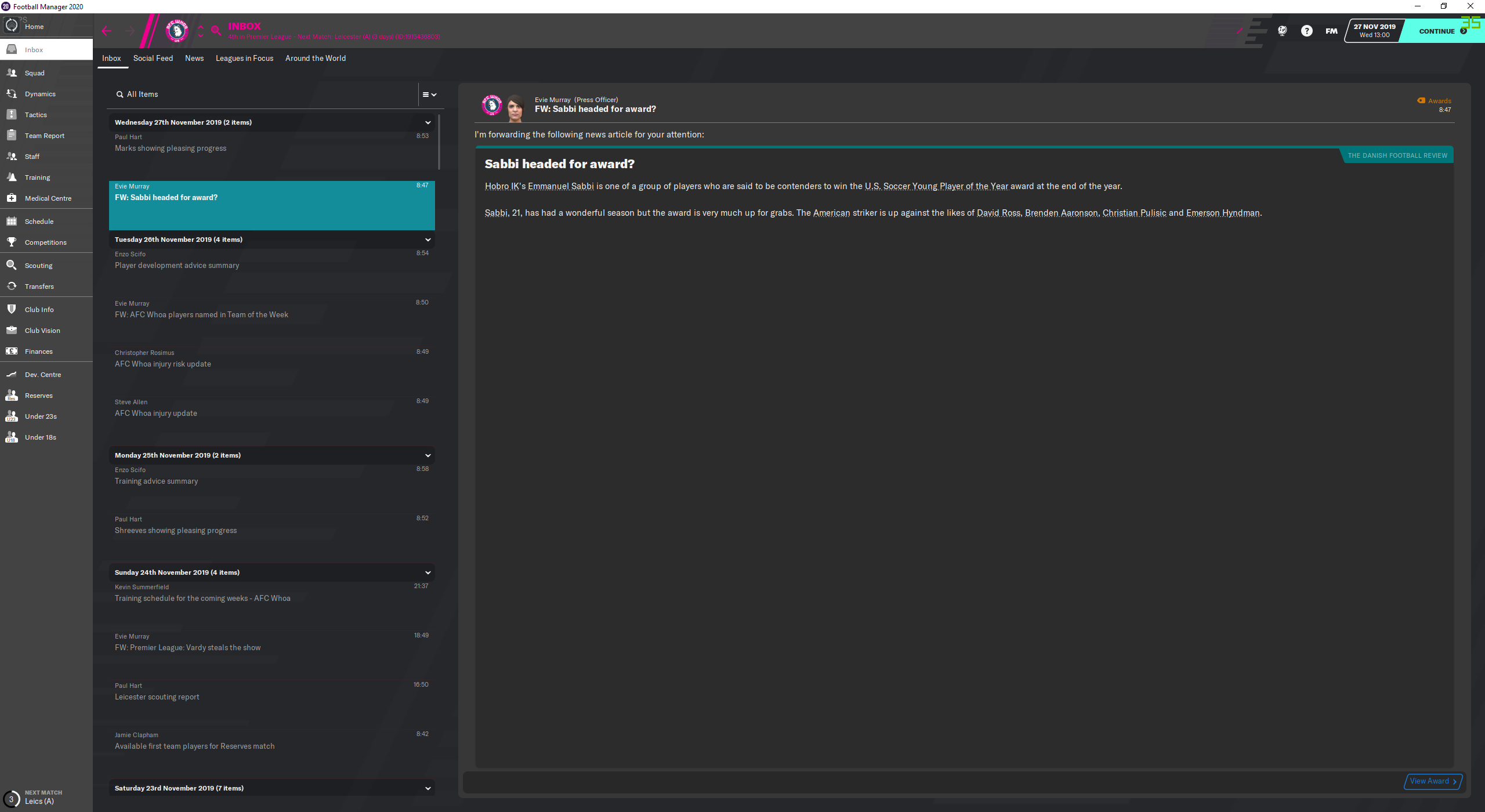 Marks gets hurt before the match... 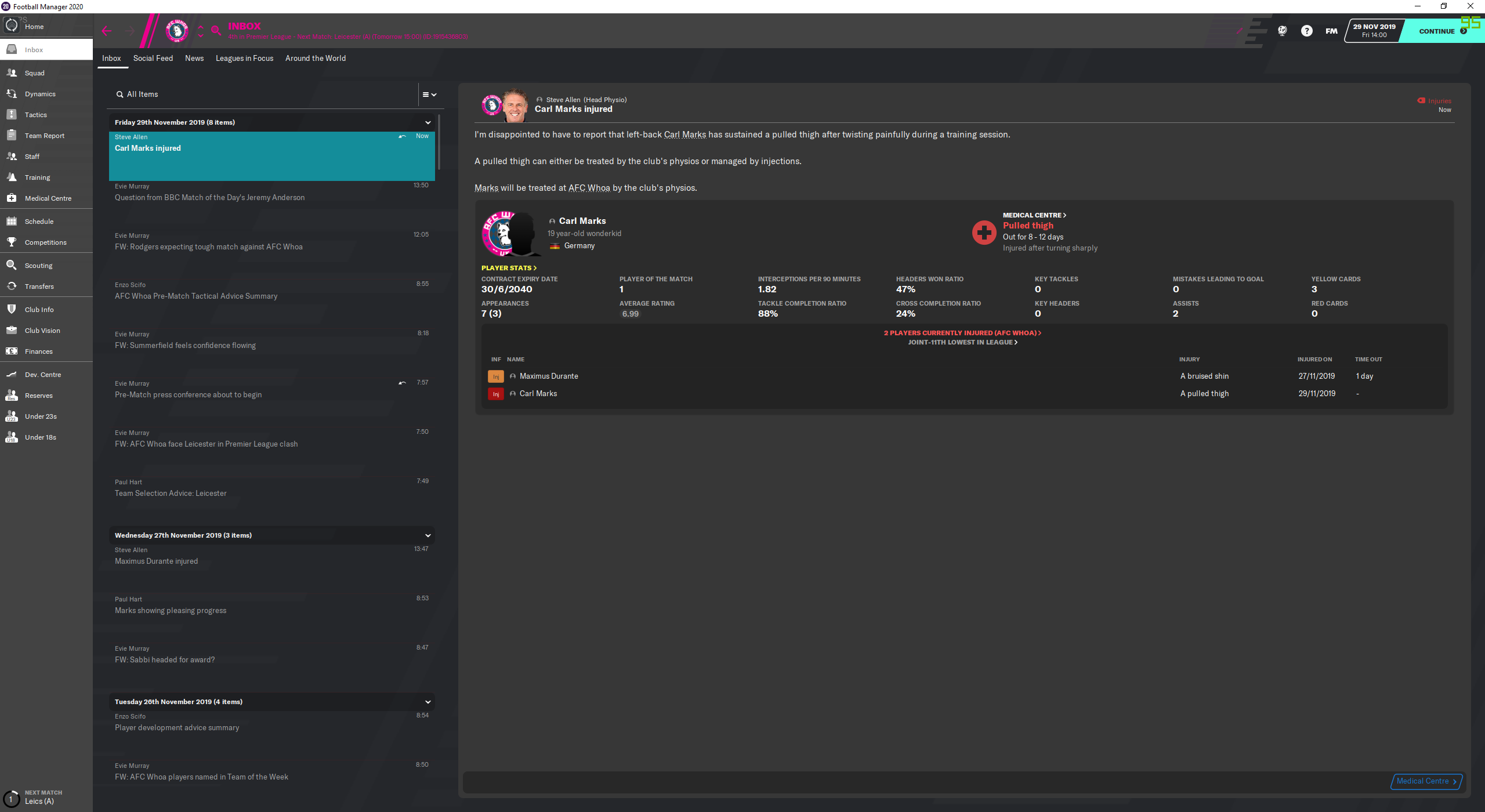 Coming off that blood-pumping matchup, we visit Leicester City...

I think we'll stick with that 3 at back formation. We seem to do well with it... 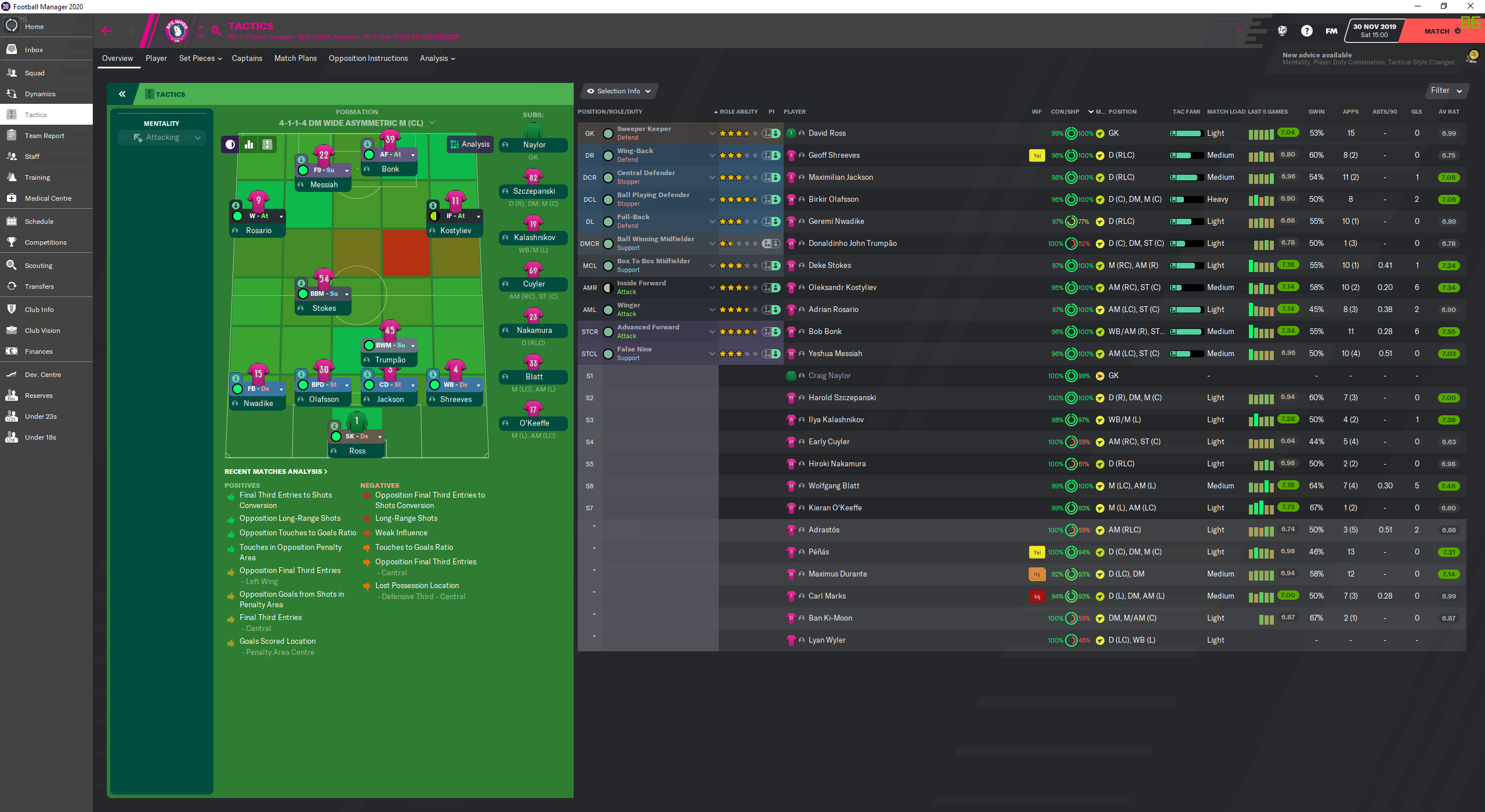 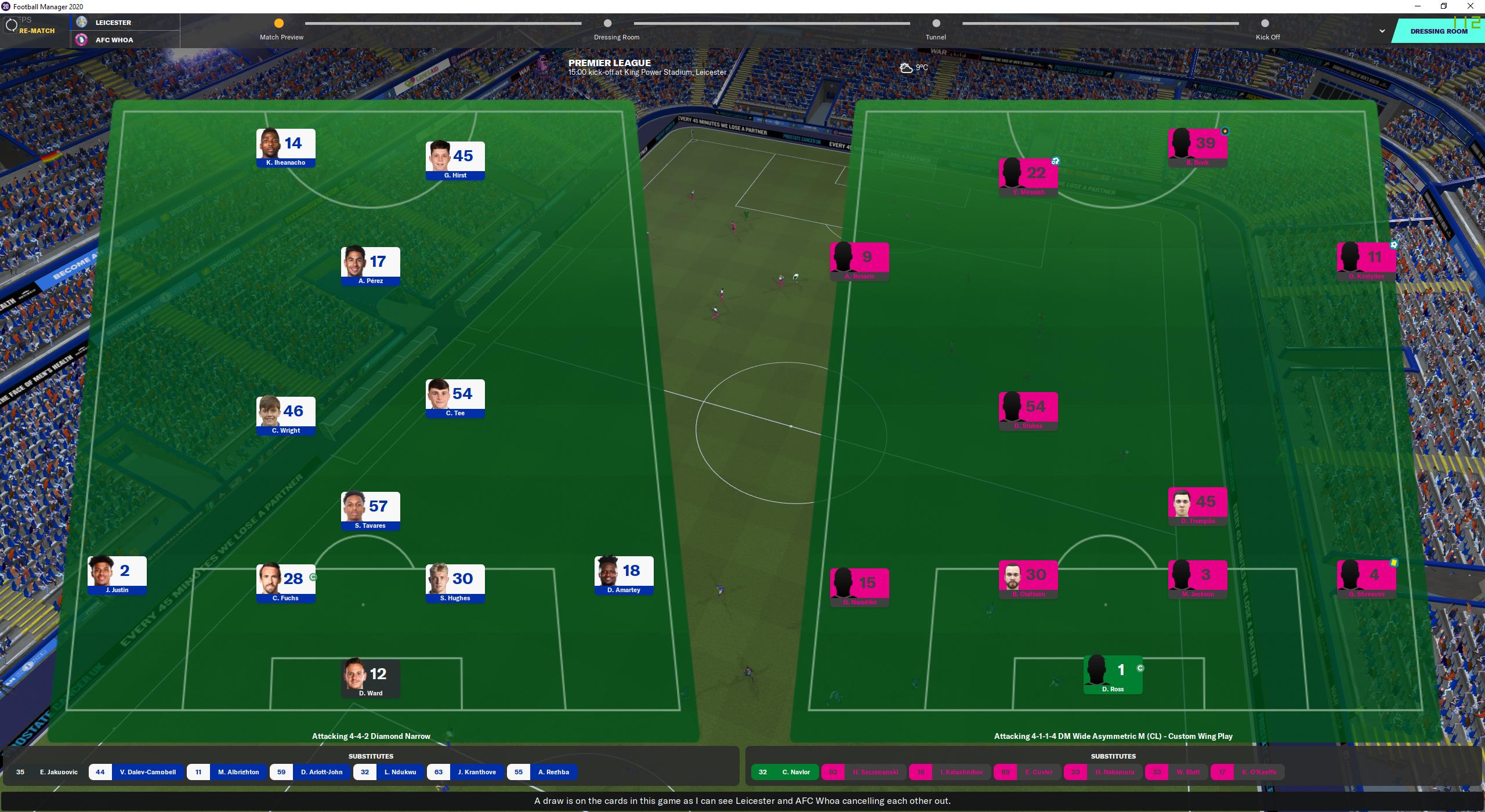 Disaster early for the Foxes! Amartey with a terrible pass back to his keeper. Messiah pounces on the slow ball and puts it past Danny Ward and AFC Whoa jump to an early 1-0 lead just 4 minutes in! Messiah's first goal!

Bonk just CONTINUES to impress. A great pass down the right side by Kostyliev puts Bonk in a great position and he beats Ward easily. 2-0 just 9 minutes into the match.

Jackson makes a great last ditch tackle to kill a counter attack and the rest of the defense arrives to help. What a play by Maximilian.

Kostyliev are showing everybody what a great combo they are, playing a bit of Tiki Taka here which helps Kostyliev get into a great position inside the box and he's taken down for a Penalty! Fuchs with the tackle and now a yellow card for his troubles. Bonk steps back and sends Ward the wrong way! 3-0! Leciester fans are not pleased to see this type of scoreline at the 38 minute mark.

Again, Bonk and Kostyliev are just abusing the right side of the pitch, but Kostyliev sends this one just wide.

Ihaenacho gets free on the left side and out paces Jackson but Ross gets a huge paw on the ball and makes the save. What an effort by the start keeper!

ANOTHER GOAL! Who is it this time? AGAIN the Bonk/Kostyliev partnership pays off. The Ukrainian's vision gives Bonk an open lane who slots it into the bottom left corner with just about 21 minutes left. Bonk with the hattrick!

What. A. Strike. Tavares shoots from outside the box and Leicester pull one back. 4-1 71'. That's his first senior goal.

Bonk gets his fourth goal!... but it's offside. Way offside.

Finally, the referee looks at his watch and blows the whistle, ending Leicester's misery. 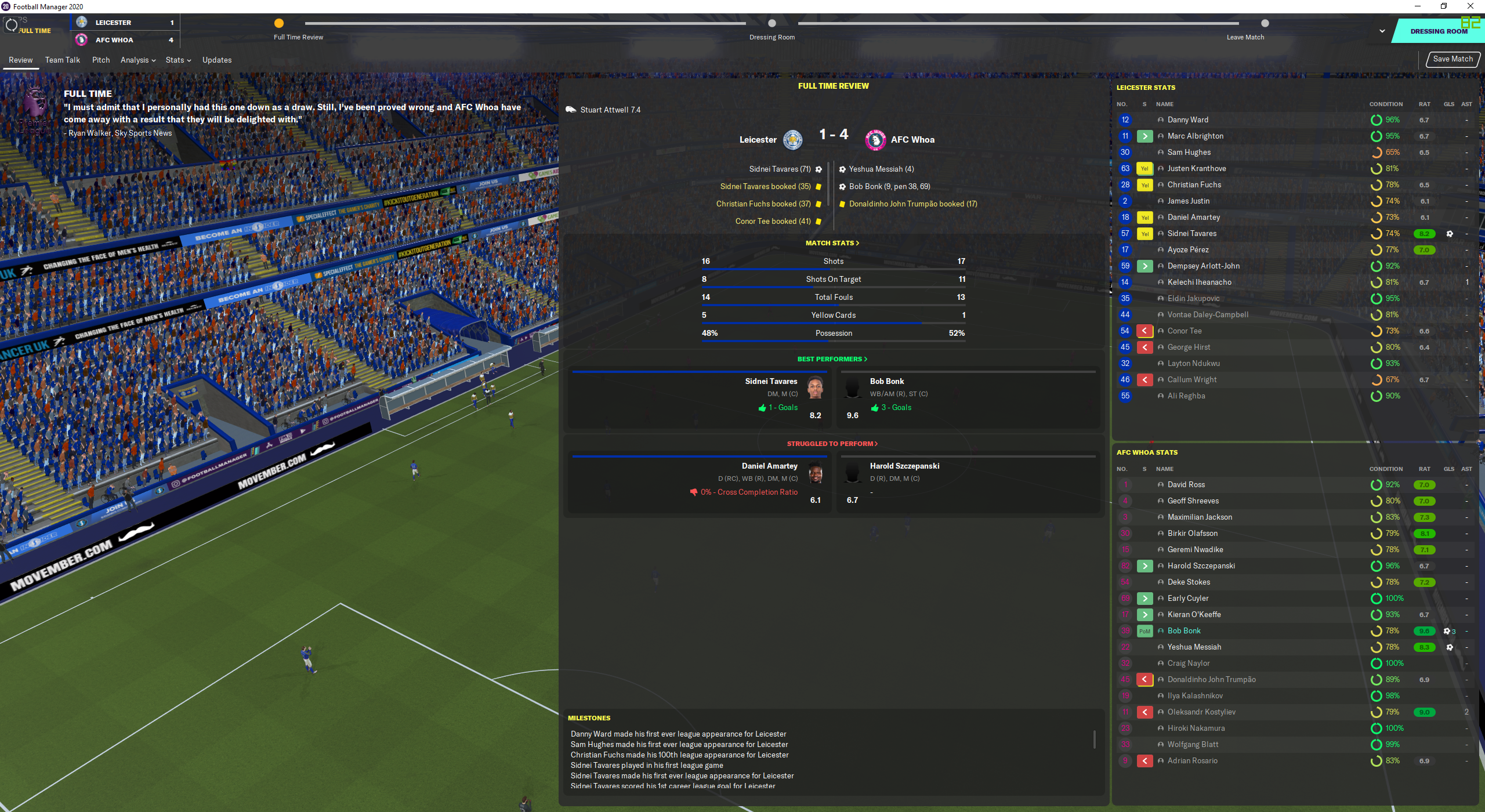 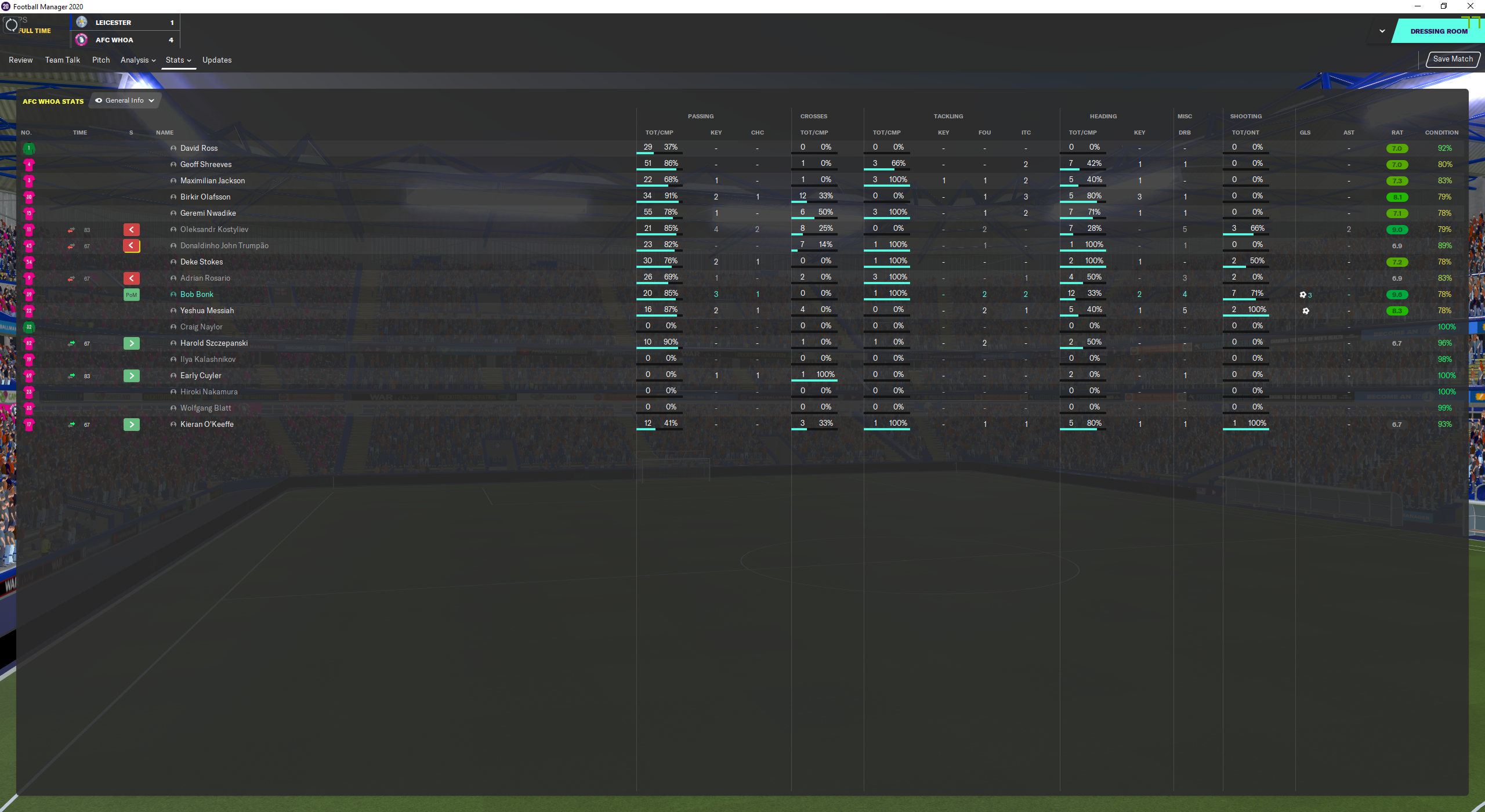 And let me tell you. I think Bonk got ROBBED. Kostyliev, as well. 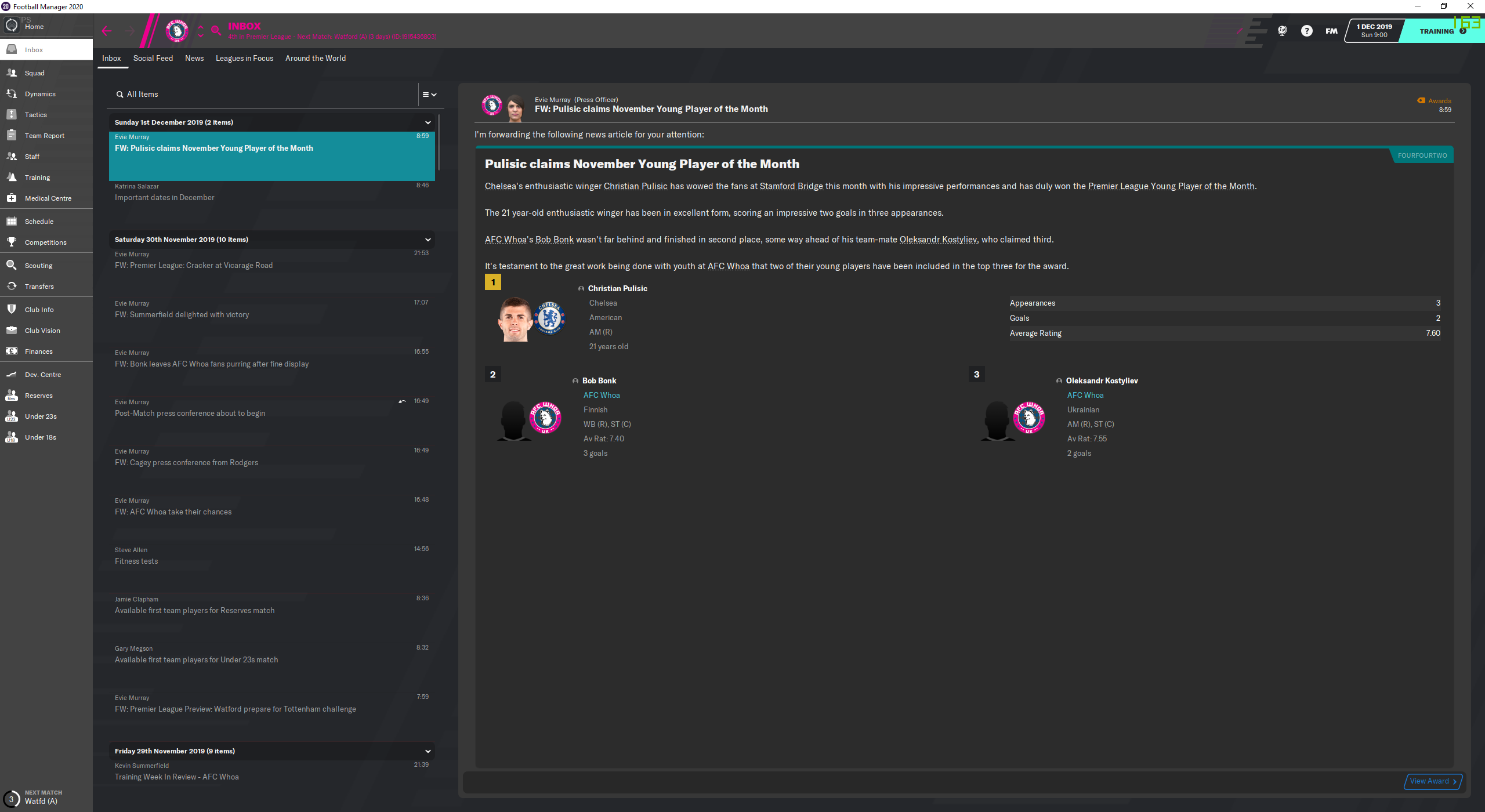 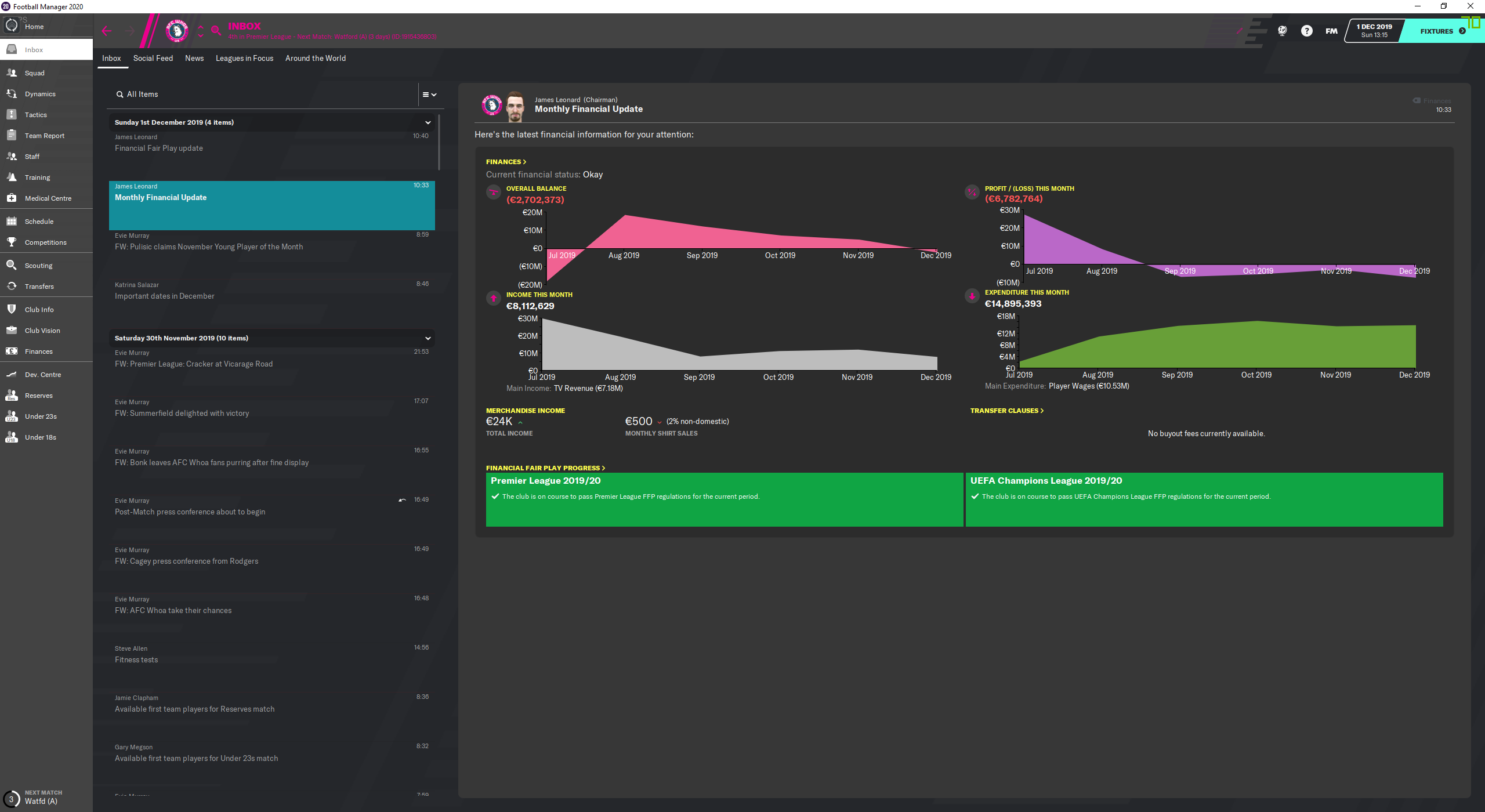 That's it for this episode, but before we go, let's get a quick status update on everyone. 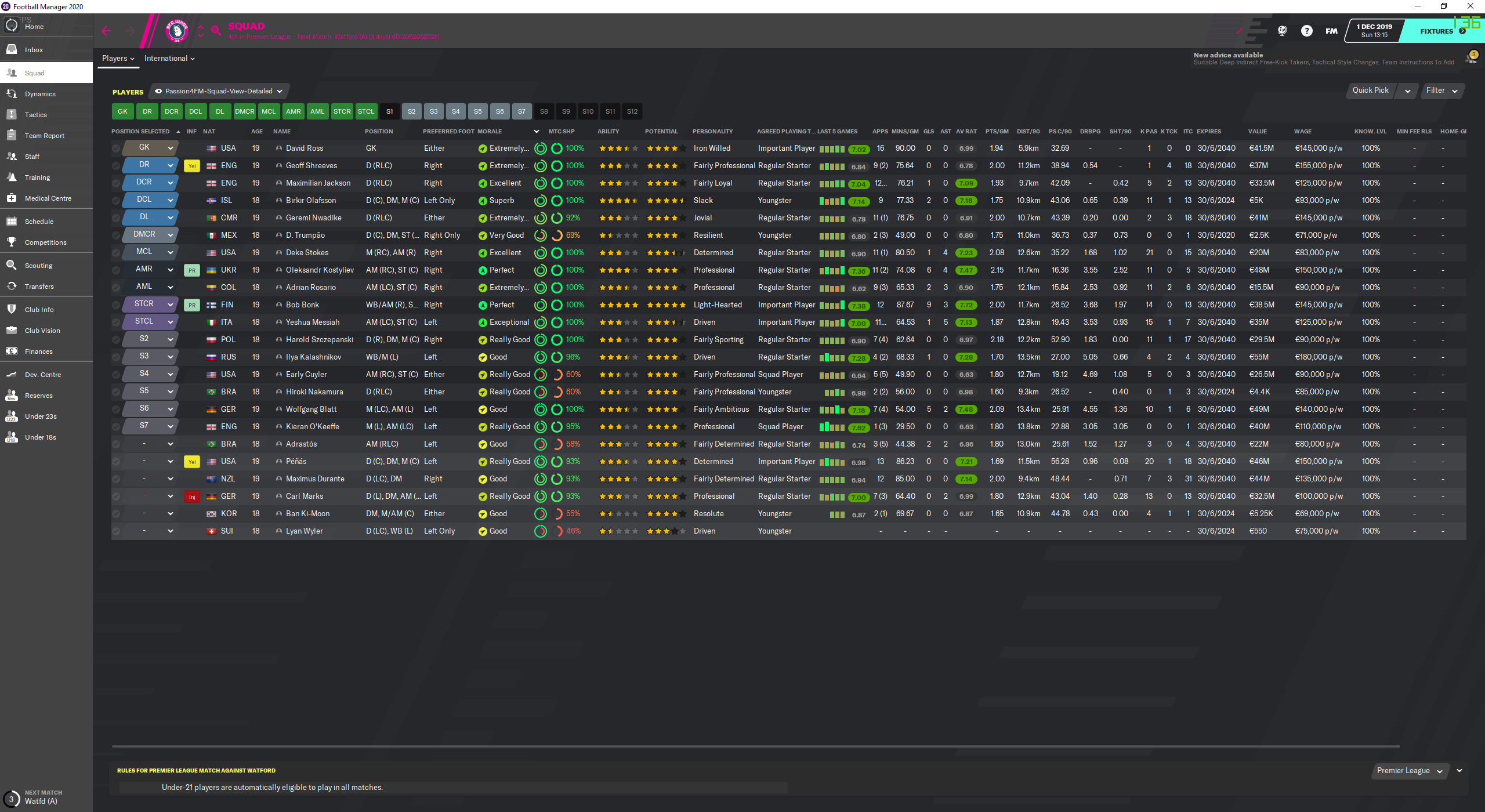 Next month is quite crowded with 6 matches. We'll probably break it up into two posts, but we'll see. We have: 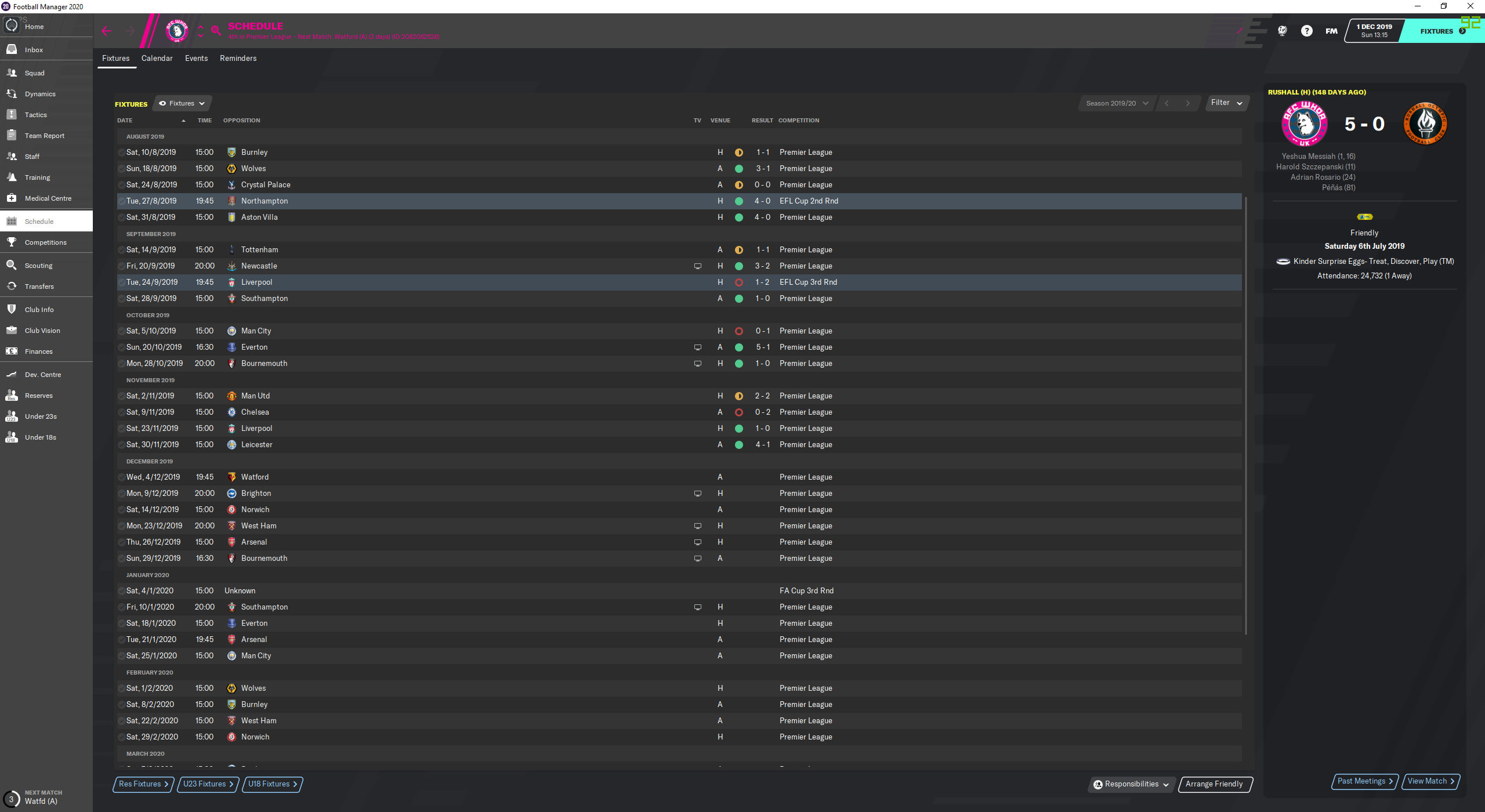