[2022] Storm slows Snowbos owner, but team wracks up a blizzard of points (and good will?)

Minnesota Snowbos owner @llamas sits in his office, feet upon the desk, fingers interlaced behind his head. Directly behind him, a fireplace burns, the light from the flames glowing comfortingly around the room. Eight or so feet above the cherrywood floors, a collection of beheadings is proudly displayed, the flames of the fireplace casting curious shadows upon the members. Decades of whitetails adorning trophy antlers. There's a gnu, taken in South Africa. A collection of Namibian and Mozambican impalas. A prized pair of African antelopes consisting of a kudu and a sable, taken, ironically, in Texas. An alligator from the Louisiana swamps.

But these trophy animals aren't what's on llamas' mind. In front of him, covering the entire wall he's facing, are pictures of visits to various animal education centers. To the left, from our very own Twin Cities, the Como Zoo, where llamas observes a zebra. Further up the wall, the Nashville Zoo, where a giraffe leans in near for a picture. Dead center, a curious Snowbos owner is pictured overlooking a heard of bison, nestled into a valley of the Black Hills of South Dakota in Custer State Park. And to the right, images from when he was growing up, with the macaws of Madison's Henry Vilas Zoo; and a picture torn at the edge, removing a lover of long ago from a flock of peacocks at the Milwaukee County Zoo.

Llamas sighs. Animals have been important to him for his entire life. The inaugural Snowbos logo regally displayed a prominent moose, penguin, and grizzly bear. (Never mind the fact that the moose was coked out and being tazed, the penguin was panhandling, and the grizzly was suggestive of an over abusive police force

He had made a bet with the owner of the Philadelphia Phatties, but in the harsh Minnesotan winter, he'd been late to arriving to the Mall of America Parking Lot, and had missed much of the first quarter. The Snowbos had won the game, but he'd missed which team's (terrible) quarterback had thrown the first pass (likely wildly incomplete because passing the football is a skill none should master since tossing a pigskin in a forward manor is an imperfect mark on an otherwise blemishless ground and pound society). Having promised a great wealth, llamas decided, no matter what, he'd honor his bet.

When I worked in Madison, I'd go to the Vilas Zoo all the time - you can walk around the entire thing in ~45 minutes, the perfect time killer. At the end of 2017, I was getting super depressed for reasons I'll mostly spare from this specific post, but this girl who I worked with and had been pretty close friends with left for different employment, so my job was increasingly having me come in to cover for people (who were already "covering" to fill her vacant shift) from 7am-11am and then I'd have to come back for my normal 3pm-11pm shift. I lived an hour from work, so during those 4 hour breaks, instead of going home, I'd cruise around the city a bit (avoiding campus because fuck UW

), often getting a light lunch and then checking out the zoo. I wrote my two weeks notice for that job (which doesn't sound like the biggest of deals, but one of my bosses had been my supervisor at a different job and I'd followed him there, and he'd became almost like a big brother to me, so it was hard to move on from having him around) from a bench outside the giraffe house. No one goes there during the middle of the day really, so it's just you and the animals, and your thoughts. Peaceful. Therapy.

The Vilas Zoo is a bunch of sluts though for not giving me the option to donate what I want, so they don't get a (public) donation (in this post) because their greedy asses have a minimum donation of $5

So instead I decided that, since I can't represent my "home" away from home, as the Vilas Zoo often became, for this post, I'd donate to one of the major fundamental programs that had come inside my home and instilled a love for the animal world in me: 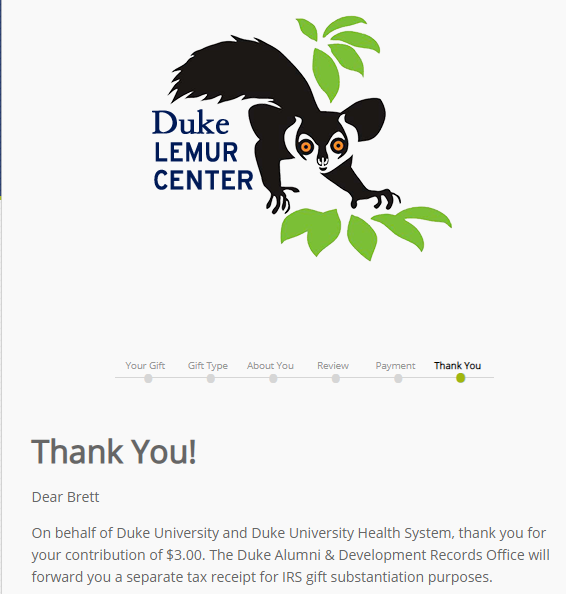 The Duke Lemur Center is one of my biggest travel bucket list places. Zoboomafoo was my favorite show for a good portion of my childhood, and Jovian, the lemur much of the show starred alongside the Kratt brothers, lived at the Duke Lemur Center.

*all statements in italics before the story break are simply editorialized flavor, I haven't ever been on a safari and display zero dead animals in my house (yet)

I honestly wasn't expecting a donation from the game, but I absolutely respect it. Because of that, I'm matching your donation to the Duke Lemur Center as well.

Amazing! Thanks for being such an awesome member @llamas! Thanks for the match, @TuscanSota!